Our bid-chair James Bacon had a meeting on the 3rd of May 2012, first with Tom McPherson at the Convention Centre Dublin and then with Donna Brogan and her team at Failte Ireland, it marked a point in the history of the bid.

Today marks the fifth anniversary of what could be considered a formal beginning of the bid, a point when ideas and discussion turned into external meetings and actions.

The Convention Centre Dublin (CCD) had been opened in September 2010 and by May 2011 when the Queen of England’s visit marked the 250th event, it had made a definite mark in many people’s minds as a spectacular venue. A world class venue, just right for a world class event.

It is hard to know exactly when the concept of running a Worldcon in Ireland became more than a wish quickly dismissed. The CCD opening was crucial to any thoughts for sure. Before the CCD, I am certain that the concept of an Irish Worldcon would have been dismissed and indeed nonviable. So it was and is an important and key part in the bid from its inception and at every stage working with them has both been a pleasure and a partnership.

Discussion of Worldcons are continually going on, right now across the World from Australia to China, France to Japan, South Africa to San Jose, people will be talking about a Worldcon. Sometimes it is a fun and hypothetical game, sometimes it is earnest contemplation and serious discussion, but talk is cheap.

In August 2010 the idea of another Eurocon in Dublin, the weekend after a potential London Worldcon was born from Au Contraire being the week before Aussiecon 4. The Eurocon bid elicited support from Bord Failte, the Irish Tourism Board.

I am pretty certain the first Worldcon in Ireland conversation definitely happened in 2010.

So in May 2012 some 18 months later, I was walking into a venue, and many people had gone from discussing it to helping make the meetings a success and help prepare me and ensure we looked right.

James Shields, who was leading the Eurocon bid had already some contacts with Failte Ireland by 2012, who were only too willing to meet about a ‘Worldcon’.

Data was extracted from the vaults of the previous Worldcons, chairs, senior staffers with experience all worked secretly and willingly to help any potential bid. It felt like any time I asked a question I was pushing an open door. Many of those door openers are on our bid committee and if we win, on our convention committee.

Experienced opinions were sought, thoughts and discussions at home and abroad frequently came back to the feasibility of the venue. In Dublin the venue had had an impact, and again, that created a question after initial excitement. The CCD was really a key part.

I had learned the hard way, that announcing that one is going to do something before one is ready or worse, at a stage where it might not come to fruition is really bloody unhelpful. It made me averse with con running, to commit to much, or hypothesize publicly because even an idea can create expectations, set people off in a direction, or result in disappointment. So at this stage, everything was still very quiet, beyond the long list of people who had helped it was not publicly known

Information was prepared to ensure everyone understood what a Worldcon was, and indeed it was repeatedly checked and re-written to ensure clarity and understanding

The first meeting had to be a good one.

I was traveling over from London where I was living, the greeting I received at the CCD was incredibly welcoming, indeed, I am not sure what the were expecting, but I think they may have expected someone not so committed to Ireland. A lot of their preparations which they wanted to present centred on choosing Ireland as a country.

This was not at issue, for me at least.

The realisation, mostly from my accent, but also from my response that I was absolutely committed to finding a way to make a Worldcon work in Ireland, was no doubt a relief. I did not realise how much of a hurdle had been overcome and the team and myself made light of this. Nowhere in all the documentation that I had shared did I mention I was from Black Horse Ave., Dublin 7, schooled in my conventioning ways from the age of 16 at Octocon, (Octocon.com) the National Irish Science Fiction Convention or that the cities comic shops had become my second home, until I moved, like so many.

With international conferences, the country and city are an important step.

The idea that I had to be convinced that Ireland would work, was astonishing. I was not yet confident that the venue was feasible. A Worldcon venue can look the right size, and be the right shape, but the management, economics, staffing can all alter suitability at the blink of an eye.

The day was a success. Business could be done, and although it initiated a negotiation that continued, the willing and positivity was suffice to ensure that the idea drove forward.

Even at this early stage, people at home and far afield were willing to spend time and effort on the concept of a Worldcon in Ireland. Prepared to keep a secret. By Octocon the same year, it was clear that a bid would be viable, and a moment I will never forget was when Gareth Kavanagh with a level of seriousness that was impressive, asked for videos to be halted, recording devices turned off, and at the closing ceremony in front of a large chunk of Irish fandom, I asked the room to keep a secret. Even with site visits, with huge levels of engagement and public gatherings, no one spoke. No one publicised it, hundreds were now so committed to the idea of a Worldcon in Ireland, but they kept it quiet.

Five years after that meeting in the CCD, it is now 100 days until the vote in Helsinki.

There is a lot of work going on right now, and there will be a lot more in the next 100 days.  Thanks to work by so many people we are where we are, looking at a place where we could be a seated Worldcon.

Time is a huge subject of science fiction and it’s linearness is not always clear when you are involved with so many people. If I said that a commitment of 3 years is a huge commitment it would not be a world of a lie, yet at this stage, we will have people who have worked for that amount of time, and less, take a break, or deal with real life or get promoted, and yet, I cannot forget their efforts, and hard work, we cannot afford to be anything yet humbly grateful for that work.

Some supporters, volunteers, friends have shrugged off their mortal coil, a sad contemplation, but they are not forgotten, we will remember their names, as we remember everyone who helps.

The hobby of Worldcon running is such that people come in and work on a thing and then may depart, later to join us in celebration and enjoyment as a piece comes to fruition, for their building block is vital.  At that time right then they were ensuring the future holds a Worldcon in Ireland.

Time can be so unusual, I am not surprised it makes good fiction, sometimes things seem to take for ever or then there’s just not enough time. As chair it is hard to quantify all the hours, the 1.000 upon 1,000 of hours that have already been worked. The sum of so many parts building an Irish Worldcon.

At this stage, I could say that ‘Now the real work begins…’ but that feels like cliched rubbish given the thought line I have followed here. 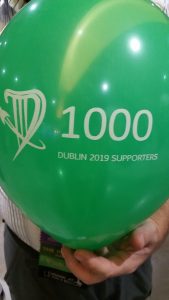 Of course, we have a vast amount of work to make the Worldcon in Ireland the success that we hope and desire for. To help make it the great celebration, the fabulous social scene and all so much that excites and entertains and educates and enhances. There is so much more work to be done, so many people to recruit, so many others to welcome back, and all of us bring to fruition a really amazing weekend.

We have 834 days until we hope to host a Worldcon in Ireland, and I know that each and every one of those days, someone, no, many people actually  will be working every single day to bring passions to fruition, making sure the structures and systems are humming along, bringing their dynamism  to make sure that we can give a big welcome to thousands of people to an Irish Worldcon.

All different lengths of time, and no matter how much time any fan has worked on the bid to date, I am very grateful and I am sure so many will be thankful.