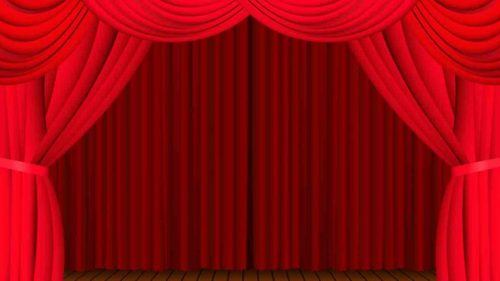 Performed at the 2018 Toronto Fringe Festival, Geek! is a love letter to anime and fandom. (Directed by Liz Bragg)

It’s Dante’s Fire Con! Danya and Honey need to fight their way through a steampunk army, devil cats, a psychic wannabe-boyfriend, and the absence of Honey’s sister to meet their hero, the one, the only Samagashi! A love letter to geeks of all stripes, Geek! celebrates the power of fandom, conventions, and cosplay to forge connections and bring fantasy to life.

This Saturday August 17 will be the first, albeit, truncated version of this play ever seen onstage (it has only existed in staged readings at Capricon and was originally created as a short for Solstice Arts Centre in Co. Meath). Though we have the the costumes, the puppets, the props, the people–we’d like the audience to help us decide which ‘side’ these elements fall on. Are they Diwata? Are they Sidhe? Are they mortal? We have some idea, but we’d like you to participate in the final say.

Therefore, please join us on Thursday 15 August (Warehouse 2 at Point Square) for a 30-minute discussion of the Diwata, faeries of the Philippines. Help us decide if what we’re planning to put onstage on Saturday really represents what we tell you about the Diwata. I mean, who wouldn’t wanna talk about Diwata?

On Friday 16 August (Cabaret Stage, Wicklow 2A), join us for a 30-minute discussion of the Sidhe, faeries of Ireland. The playwright admits that, even though she received her doctorate in Theatre History from Trinity College Dublin, she’s not Irish, so she really wouldn’t want to claim authority on this so please help her out here (just be gentle.)

And then on Saturday 17 August (Second Stage), join us for the 1-hour World Premiere of P/Faerie Tale.

A few weeks before Dublin 2019, we will be releasing an audio recording of the first scene of the play, which we will NOT be performing at the Convention. It’s a prequel which should not be necessary to listen to before the show but which will enhance the events above.

About the Play:  Mara, an Irishwoman, heartily disapproves that her son married her former caregiver, Naomi, a Pilipina. But Naomi needs Mara’s help because the one-year-old child of the union has been abducted by faeries and Naomi cannot battle Irish faeries (Sidhe), having only ever encountered Philippine ones (Diwata). Are P/Family ties stronger than P/Faerie magic or will the bitter P/Feud between the two women leave a child beyond the Pale P/Forever?

Dublin 2019 is thrilled to present the World Premiere of the stage musical adaptation of The Enchanted Duplicator, the classic of Irish fanwriting by Walt Willis and Bob Shaw. The Enchanted Duplicator features Jophan in this fannish parody of John Donne’s The Pilgrim’s Progress. (Book and Lyrics by Erwin S. (Filthy Pierre) Strauss. Score by Divers Hands. Directed by Erwin S. (Filthy Pierre) Strauss.)

The Enchanted Duplicator will be performed on the Second Stage, Thursday, 6pm.

Down Below the Reservoir: A Dance In the Dark

DOWN BELOW THE RESERVOIR PRESENTS: A DANCE IN THE DARK
There is no God. Love is impossible. Everyone drinks the water here.

DOWN BELOW THE RESERVOIR, Ireland’s first horror fiction podcast, is adapted from the works of acclaimed horror writer Graham Tugwell and voiced by award-winning YA authors Dave Rudden, Sarah Maria Griffin and Deirdre Sullivan. Join them at Worldcon 2019 for a very special event – a live performance where the audience is in control and the authors are at your mercy. You choose their actions, as their characters attempt to navigate what was supposed to be a celebration, what was supposed to be the best night of their lives…

Down Below the Reservoir will be performed on the Second Stage, Saturday, 10pm (Adult Content).

Tantalus Ireland presents the premiere of A Critical Miss, the story of a group of friends as they finally end a role-playing campaign they have maintained for many years.

On the eve of a new real-life adventure, the epic quest that five lifelong friends have carried together must come to an end. “A Critical Miss” tells the tale of a group of friends as they finally end a role-playing game campaign they have maintained for many years. Together, they bid a world that has meant much to all of them – as well as the characters that inhabit it – one last farewell.

A dramatic comedy penned by Tantalus Ireland, the creative minds behind “I Want to be your Canary” and “Tales from the Shrinks Couch”, “A Critical Miss” delves into the world of table-top gaming and just how much it means to those who consider co-operative storytelling one of life’s greatest joys.

A Critical Miss will be performed on the Second Stage, Monday, 10am.

A radio play for voices, CON-EIRE is a love letter to the folks who do the thankless work behind the scenes of science fiction conventions everywhere. (Written and directed by Kate Laity.)

“From the bowels of back-of-house, from the deepest, darkest, most secret chambers of arcane ConCom knowledge, comes a screamingly funny glimpse into what’s behind the curtain at a science fiction convention. Fairy-dusted hilarity served with a side order of giggles.” —Lee Martindale, author of To Stand As Witness and Hell Hath No Fury

It’s three days before the start of Con-Eire, the best Irish-themed science fiction and fantasy con in the tri-state area, when a phone call sets the entire Convention Committee into panic mode. Is Big Name Writer going to pull out at the last minute? What does Very Famous Artist have to do with that decision? And what do the fairies have to say about all this? Follow the hilarious mishaps as the committee members work desperately to salvage months of planning and hard work, all of which are about to be undone by a well-known prima donna.

CON-EIRE will be performed on the Cabaret Stage, Friday 5pm.

Pete (the Cardinal) Cox – previously poet-in-residence of The Dracula Society – is bringing his “spooken word” show High Stakes to Worldcon! In the one man show he explores the fears we all have, be they mortgages or vampires, delving into the darkest depths of human existence, and then awarding prizes for the best shoes in the audience (with some reminiscences aided by puppets along the way).

High Stakes will be performed on the Cabaret Stage, Thursday 11am.

What can possibly go wrong when a mad scientist bent on world domination revives the bog mummy of an iron age Celtic Warrior just to blow the Carnyx of Terror, an invincible enchanted Irish battle horn of unfathomable power? This hilarious hour-long adventure features some of the finest professional voice talents of Ireland and an astounding array of live sound effects and music.

Dr. Krell & The Carnyx of Terror will be performed on the Second Stage, Friday 6pm.

A satire aiming not only at cosmic horror and insanity, but also criticising the inherent racism of Lovecraft’s works as seen through the lens of modern corporate management. Directed by Grzegorz Biały.

In the abysmal past of 2018 malignant forces prepare for the unspeakable. Two young, ambitious corporate employees are about to discover, that Lovecraftian horror dwells in every Excel spreadsheet, and every calculation cell reeks of an obscene conspiracy and abhorrent adjectives in numbers innumerable.

The Eldritch Accountant will be performed on the Cabaret Stage, Saturday, 12:15pm.

A short, in-universe Girl Genius play in the style of old time radio, hosted by Phil & Kaja Foglio. Players will be selected from The Audience. You have been warned.

Girl Genius will be performed on the Cabaret Stage, Friday, 4pm.