Dublin Airport (DUB) is the major airport for Ireland. Over the last 15 years it’s been almost completely rebuilt and has easy access to the city.

You can find flights to Dublin by going to your favorite airline’s Website, Expedia.com, SkyScanner.net or Priceline.com.

Once you’ve picked up your luggage and gone through customs, it’s easy to get to Dublin from the airport. The least expensive way is to take the Airlink Express. 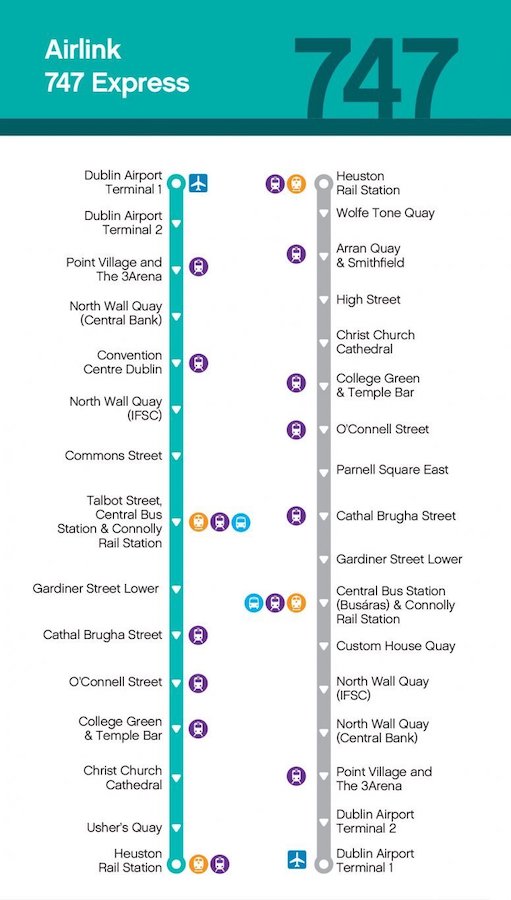 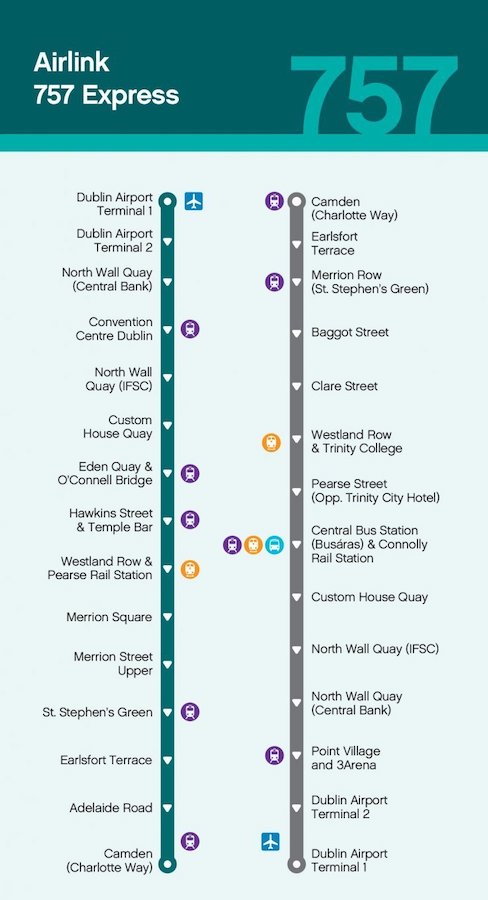 Both busses go to the Convention Centre Dublin, so if you’re staying near the CCD, it doesn’t matter which bus you take.

The 747 takes more of an east-west route through Dublin, basically paralleling the River Liffey and winding up at Heuston Station on the west side of town. If you’re staying near Point Square, Trinity College or Christ Church Cathedral, take the 747 bus.

The 757 also parallels the River Liffey but turns south at O’Connell St. If you’re staying near Merrion Sq., St. Stephen’s Green or Camden, take the 757 bus.

The Airlink Express cost is €6 to town (if purchased in advance, €7 on board), or €11 for a return trip ticket.

There are many other shuttle services from the Dublin Airport that can take you directly to your hotel. AirCoach and Dublin Coach also provide transportation between the airport and Dublin. Check the Dublin Airport Bus site for more information on additional local travel options.

There’s also cab service from the airport to town – check a guide to current taxi fares.

Direct Travel from Dublin Airport to Other Cities in Ireland

There is a tourist information booth in the Arrivals Hall of Terminal 1 of the Dublin Airport.

Do you plan to travel around Ireland before or after Worldcon and don’t want to lug a suitcase full of Worldcon-related stuff? You can check a suitcase (or suitcases) at the Dublin Airport for as long as you need and pick it up when you need it again. Left Luggage provides this service at Terminal 1 and Terminal 2. You can check a bag for 10 days for about €60.

You can take a ferry from Liverpool UK, Holyhead UK, Isle of Man UK and Cherbourg, France.

Bus 53 goes from Dublin Port, Ireland North Quay to the Convention Centre Dublin area about once every half hour. It’s about a 3km (1.8 mile) walk from Dublin Port to the CCD.

In addition to the 53 bus, Stena Line and Irish Ferries offer coach transfers from Westmoreland Street to Dublin Port and from Dublin Port to the city centre.

Train service between major cities (including Northern Ireland) is frequent and inexpensive. And, this summer, many rail lines are being repaired, which may add delays to your train travel.

Check Irish Rail when you’re ready to buy a ticket.

There are many types of rail tickets on Irish Rail so check before you buy.

For €110, you can buy a Trekker ticket that lets you travel for 4 consecutive days anywhere in the Republic of Ireland.

For €160, you can buy an Explorer ticket that lets you travel on any 5 days out of 15 consecutive days anywhere in the Republic of Ireland.

There are two major train stations in Dublin, Heuston Station and Connolly Station.

Connolly Station is close to the Convention Centre Dublin, just 1 km from the CCD. This station provides trains that tend to go north of Dublin (Sligo, Rosslare Europort), the DART train (Commuter services to Drogheda, Dundalk, Maynooth and Longford) and the train to Belfast, Northern Ireland. It is generally faster to get off the Luas Red Line tram at the Busaras stop and walk to Connolly Station.

If you arrive at Connolly Station, the Convention Centre Dublin area is less than a km away. You could walk to the CCD, take a cab, or walk to the Luas Red Line tram Busaras stop which is just 150 metres from the train station. Take the tram that ends at Point Square/Docklands and get off at Spencer Dock stop for the CCD.

Heuston is a Luas Red line tram ride away from the CCD or 3.7 km walk. Trains from Heuston go other cities throughout Ireland, including Galway, Limerick and Cork.

If you arrive at Heuston station, take the Luas Red Line tram that ends at Point Square/Docklands to the Spencer Dock stop to go to the Convention Centre Dublin area.

Wanderu contains extensive information about getting around Ireland by bus. Note that most busses coming into Dublin go to Busasras station, which is across the street from the Luas Red Line tram and is only about a km from the CCD.

You can drive to Dublin, but you will need to deal with parking. The CCD has parking for about €35 per day. It’s open from 7am-midnight. While there other parking lots in the area – none of them are open 24 hours a day; all close at midnight or earlier.

There is a 24-hour garage at Connolly Station Car Park, Lower Sheriff Street; you can reserve a spot and it is only €9 a day or €30 for the week. Connolly Station is about a 13 minute walk to the CCD or you can take the Luas Red Line tram from the Busaras stop east to the Spencer Dock stop.

While most of Dublin 2019 will be at the CCD, a few items will be less than a kilometer away at Point Square. It’s a short walk, Luas Red Line tram trip or Liffey Ferry ride (stop #1 is near the CCD and stop #3 is at the 3Arena, a block south of Point Square).

Detailed travel directions between CCD and Point Square, with information about accessibility. 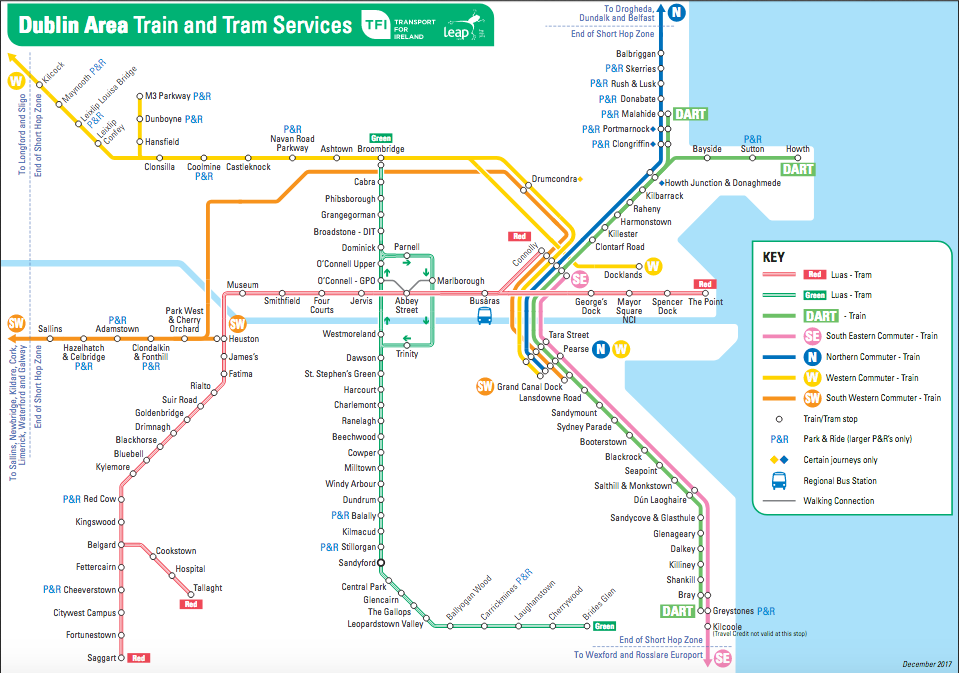 Here’s a map of the tram service, the Luas Red and Green Lines.  The CCD is near the Spencer Dock Red Line stop in the top right corner of the map.  Connolly is the stop for the local train lines (see the DART Train/Luas Tram map above) and Heuston is the main train station with trains to the rest of Ireland (Red Line stop towards the middle of the map). Note that you can walk between the Luas Red and Green Lines at Abbey Station 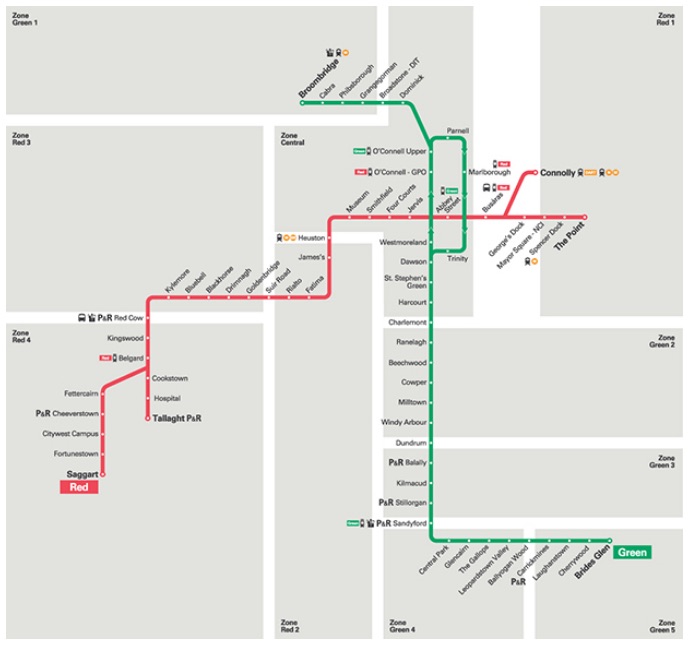 Luas is a new system and is completely accessible.

Dublin Bus site is the most comprehensive info source for the bus system in Dublin. They also have an app you can download. The Dublin Visitor Centre has a map of the city bus service. This is a huge and detailed map; you might want to download it to your smartphone if you think you’ll be taking the bus.

Dublin has recently revived one of its ferries for weekday travel. For €2, you can travel down the Liffey, and one of the stops is close to the front entrance of the Convention Centre Dublin. 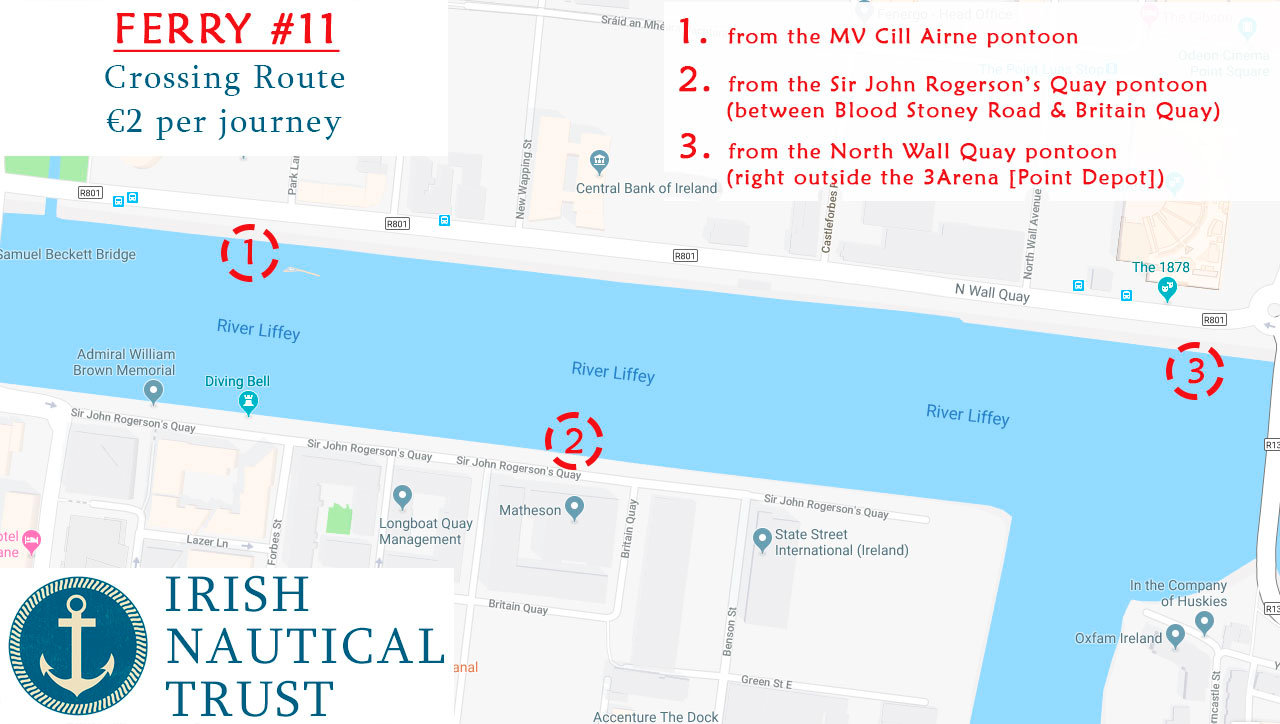 The CCD is within a block of the #1 ferry stop – MV Ci11 Airne pontoon. The Odeon/Point Depot/The Gibson are less than a block from the 3Arena (#3 ferry stop). The ferry will run Monday-Friday from 7am-7pm.

A Leap Visitor card is generally for tourists who are traveling for a few consecutive days in the area. A TFI Leap card is more for commuters or local people who might not travel consecutive days and want to be able to easily add more value to their cards.

There are three types of Leap Visitor Cards:

The Leap Visitor Cards give you unlimited transportation on all of the following types of transit:

You can buy the Leap Visitor Cards cards before you leave for Dublin; select the Visitor Card option in the Card Type field. You can also buy Leap Visitor card at various machines at the airport, train stations and all over Dublin.

You can calculate bus fares if you are staying on a bus line; that can help you determine whether the Leap Visitor card is better for you than the TFI Leap card. You can check with your accommodation to see whether they recommend you get a Visitor Leap card or a TFI Leap card.

There are three types of DoDublin passes:

The one and two day cards cover Airlink Express & the Hop-on/Hop-off busses only.

You can buy a voucher for a DoDublin pass online. Be sure to print out your voucher before you leave. You must remember to go to a DoDublin office (at Dublin Airport, Arrivals Hall, Terminal 1, or Dublin Bus Head Office, 59 Upper O’Connell St.) and turn in your voucher for an actual DoDublin card – the voucher cannot be redeemed on the busses.

So which travel card is better for you?

If you’re staying near the CCD and don’t plan use mass transit very much, you probably don’t need any travel card. The Airlink Express for transit from the airport costs only €6 one-way, €11 return (round trip).

If you are staying in an accommodation on a Luas tram line, bus line or the DART train, and expect to use mass transit every day, especially if you also use the AirLink Express to travel between the airport, buy a Leap Visitor card for seven days. That way, you can travel on any kind of local mass transit for seven consecutive days without having to worry about paying for individual trips.

If you plan to travel on mass transit occasionally, buy a TFI Leap card.

If you’ve never been to Dublin before and plan to use the DoDublin Hop-On/Hop-Off City Tour, buy a DoDublin card. The Hop-On/Hop-Off is a great way to visit many city attractions across Dublin.

Dublin has many small taxi companies. Most drivers can be reached through taxi apps. Our staff tried several apps and recommend FREE NOW. Most if not all taxis take credit cards as well as cash. They’re all metered and give receipts. Here’s a guide to current taxi fares.

You can hail taxis on the street and at taxi ranks which are usually found near hotels, train stations, public buildings and busy shopping areas.

Uber is available but only operates with licensed taxis in Ireland.

The weekend after Worldcon, Eurocon/Titancon will be held up in Belfast, UK.

It is extremely easy to travel between Dublin and Belfast. The fastest way is to go to Connolly Train Station and take a train. From the CCD, take the Luas Red Line tram from the Spencer Dock stop west to the Busaras stop, and walk about a block north to Connolly Station.

However, note that the Dublin-Belfast line is one of the train lines being repaired this summer, and most of the repairs will be in August. 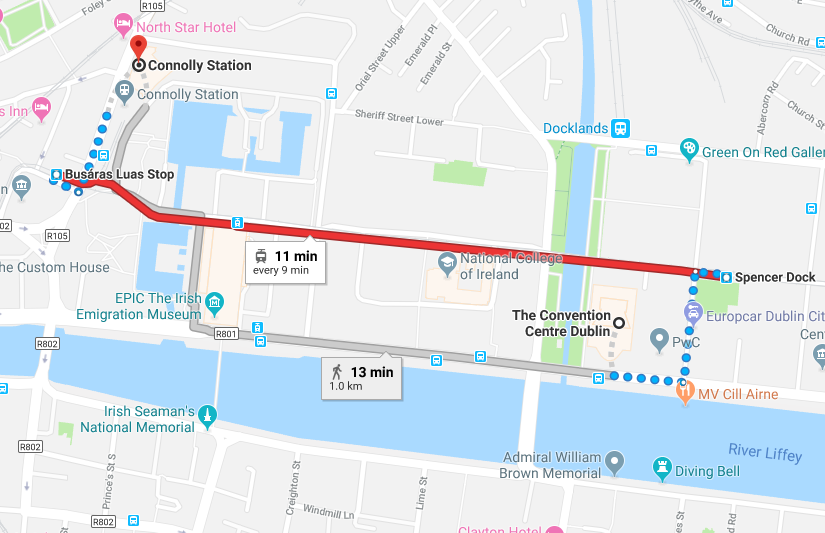 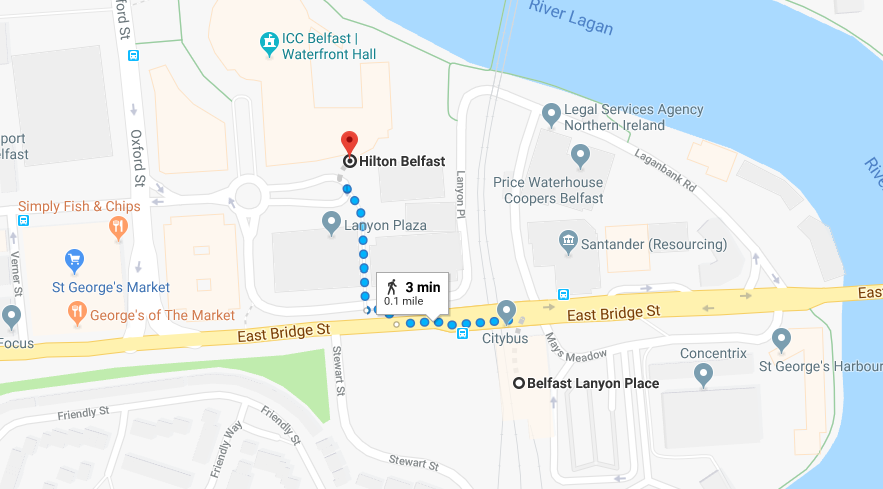 While Brexit is not yet settled, any decision has been postponed until October 31. That means if you are traveling between the Republic of Ireland and Northern Ireland this summer, you will not need to show your passport at the border.

Belfast is a fabulous place to visit any time, but this summer there is another reason to visit Belfast – Game of Thrones: The Touring Exhibition is on display until September 1. For more information and to buy tickets in advance, go to the exhibition site. Worldcon/Titancon attendees can take advantage of a special discount and save 2 pounds when they buy their tickets in advance. Use the promo code SCIFICONFS19. Note that this discount is only available 14-27 August.

Flying home from Dublin after going to Titancon? You can take a bus directly to Dubin Airport from downtown Belfast for €12. This bus leaves about a mile west from the Hilton Belfast at the AirCoach stop on Glengall St., which is near the Great Victoria Street Train Station.