Born in Syracuse, New York, Dr Epps was a NASA Fellow while completing her doctorate in aeronautical engineering at the University of Maryland. She spent two years as a scientific researcher at 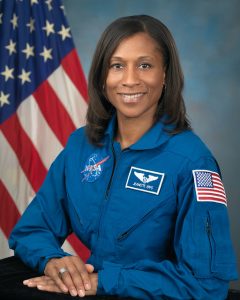 the Ford Motor Company and seven years as a Technical Intelligence Officer at the Central Intelligence Agency (CIA) before being selected as one of nine members of the 20th NASA astronaut class in 2009.

Dr Epps currently works in the International Space Station Operations Branch. She has been a Crew Support Astronaut for two expeditions and has been lead spacecraft communicator (CAPCOM), the only mission control official who can communicate directly with astronauts on a mission. She has also participated in a nine-day undersea NASA Extreme Environment Mission Operation (NEEMO), simulating exploration and materials extraction on an asteroid. She speaks fluent Russian.

Dr Epps’ interests and technical experience are wide ranging. She interned at Anheuser-Busch while an undergraduate at Le Moyne College, conducted research on smart materials in graduate school at Maryland and vibration reduction at Ford, and worked on nuclear non-proliferation at the CIA.

Dr Epps can be found at @Astro_Jeanette on Twitter. 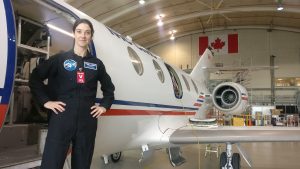 Dr. Norah Patten is a faculty member at the International Space University and is a citizen scientist-astronaut candidate with Project PoSSUM (Polar Suborbital Science in the Upper Mesosphere). Norah is an award winning STEM (Science, technology, engineering and maths) advocate and ambassador and is a competent communicator with radio, television and public speaking experience. Norah has participated in several citizen science campaigns including microgravity research flights, spacesuit testing and evaluation, and spacecraft egress. In September 2019, Norah will become a pub

lished children’s author with the release of her book called ‘Shooting for the Stars’, published by The O’Brien Press.

Norah currently works as a project manager at the Irish Composites Centre. She is a graduate of the New Frontiers Entrepreneur Development Program. She was a recipient of the Emerging Space Leaders Grant and a Next Generation Plenary panellist at the International Astronautical Congress in 2015. Through a partnership with NanoRacks, Norah initiated and managed ‘The Only Way is Up’ project which launched Ireland’s first student experiment to the International Space Station in 2014. Norah participated in the International Space University Space Studies Program in 2010, holds a PhD in engineering and has industrial experience from The Boeing Company and Bell Labs Alcatel Lucent.

Norah will be participating in Dublin 2019’s Programme on Saturday and Monday.