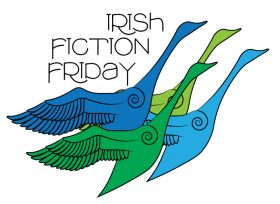 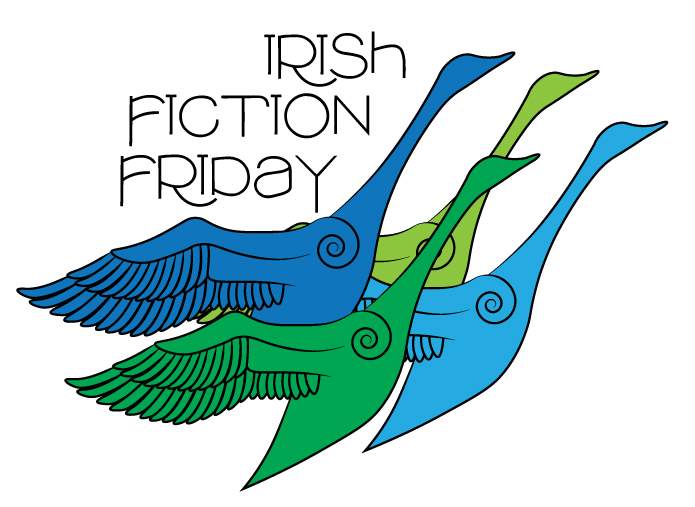 Friday rolls around again, and we’re here once more with a free extract of SFF literature. Today however, we’re also delighted to showcase our new IFF logo, made by Bid Team member Shevaun Frazier (who has also done a lot of our vector work, including the main Dublin 2019 t-shirt logos. It depicts the Children of Lir, one of our most enduring legends and the inspiration for several other fantasy stories (including previous IFF author Juliet Marillier’s Sevenwaters Series).

We’ve reprinted one version of the story below, from the Information about Ireland website, but also wanted to feature some other retellings of the story, which are linked at the bottom of the page, as well as some of the art that the story has inspired:

THE CHILDREN OF LIR: AN IRISH LEGEND

There was a time in ancient Ireland when the people believed in magic and in druids and spells. These were the days of the Tuatha De Danann tribe, the Goddess Danu and of Lir, the lord of the sea.

Lir’s wife, Eva, had given him four beautiful children. The two eldest, Fionnuala and Aodh, went swimming in a small lake. But these were no ordinary swimmers! They possessed gills for breathing and webbed feet as they were, after all, the offspring of ‘the ruler of the land beneath the waves’.

They met a messenger who told them that they were wanted by their father. They went home immediately only to find their father disturbed.

‘What is wrong father?’ they enquired
‘Your mother has given birth to twins’ he replied
‘….and has gone off to rest’
‘What do you mean father?’ they asked

Lir explained that this was what humans called ‘death’ but that since they were immortal that their mother had gone to recover, possibly for a thousand years or more. The children were to look after the new brothers, Fiachra and Conn.

The children kissed their mother for the last time and then left.

As the children grew Lir’s spirits declined until one day he met Aoife, the sister of his wife. Aoife was possessed of magical powers and soon enough it was known that she and Lir would marry. The new family thrived under the influence of their new mother but not for long as guilt and jealousy about the children’s real mother took its toll on Aoifes health. She fell into sickness for a year but recovered only to start to become old before here time.

Aoife was a changed woman now and one day suggested that she and the children should visit their grandfather. On the journey they stopped by a lake and she encouraged the children to go for a swim. The four children played happily in the water, not noticing that their stepmother was now standing at the waters edge wearing her fathers magic cloak.

‘For too long you children have stood between your father and I, but not for much longer!’ she cried

‘We cannot be killed by you…’ Aodh replied,
‘…we are the Children of Lir and if you harm us our ghosts will haunt you!’ 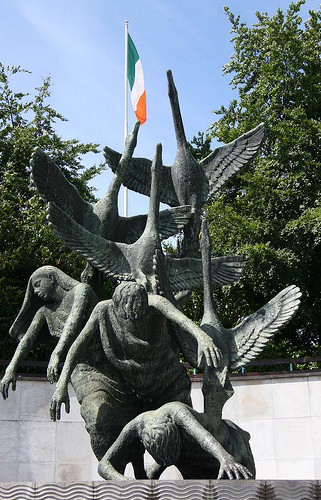 The Children of Lir in Dublin’s Garden of Remembrance, by Oisín Kelly.

At this she bowed her head and started an incantation. The children looked at each other in fear as they saw a red and gold circle envelope them on the water. They saw Aoife open up her cloak from which the great light of a fireball emerged and hurtled towards them, burning all in its wake.

The fireball hit the water and caused masses of steam to rise about the children and they soon lost all feeling in their legs, arms, shoulders and head. They soon regained their sight only to see Aoife laughing at them. Aodh tried to attack her and flailed his arms about furiously but nothing happened except the splashing of water. He turned to look at his brothers and sister only to see that they had all been turned into the most beautiful swans ever seen. 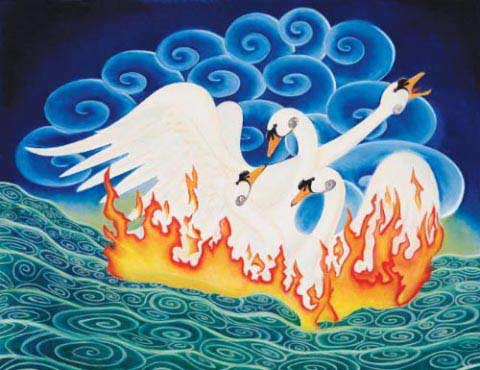 ‘I leave you with your voice however, and the most beautiful singing ever heard’ she said.

Lir searched for his children that day, but Aoife told him that they had been attacked and killed by wild boars. Fionnuala, now in swan form, approached her father and told him what Aoife had done. Lir was furious and banished Aoife into exile as an evil demon of the air. 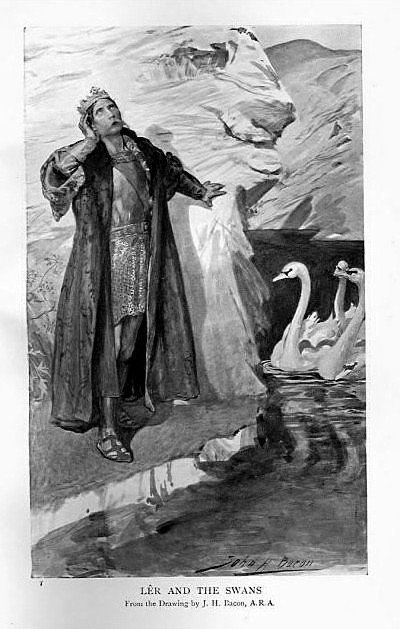 A rather melodramatic Lir hears the news from Fionnuala in J.H.Bacon’s illustration.

Lir faithfully visited his children and the power of his love ensured that their time on the lake was one of bliss. He knew though that the 300 years of the first phase had passed and that the next phase of the spell was about to begin. The swans left for the Straits of Moyle, never to see their father again. 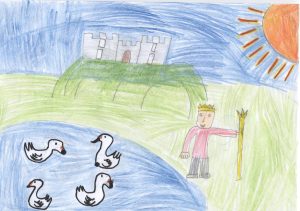 A much more cheerful Lir visits the children during their time on the lake. Art by Mr Kennedy’s Class (see blog link below for their version of the story).

Their time on the Northern Straits of Moyle were not so joyous, with frequent storms separating them, only for they to join up again. Another 300 years passed but they had survived together.

They departed the cold straits and made their way towards Lough Derravaragh. They flew over the land, hoping to find their father’s fort, but it was now nothing more than ruins. They wept because they knew the time of the Tuatha De Danann was gone.

They travelled West to the waters of Inish Glora and found refuge on a small saltwater lake where time passed slowly. One day an old man named Mochua visited the lake and the children enquired of him if he was a follower of the new God. The startled man asked if they were the children of Lir and they told him that they were. 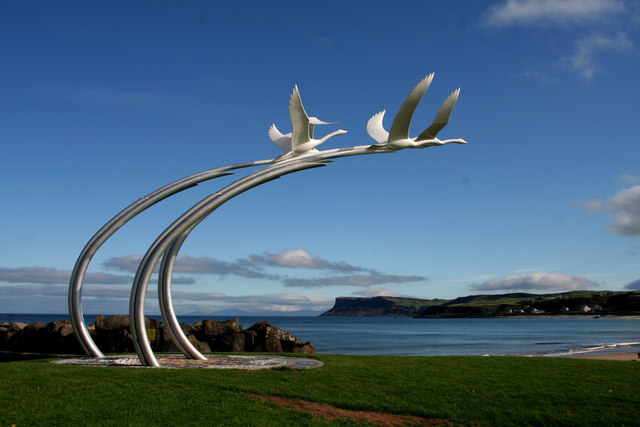 The Stunning ‘Leap of Faith’ Sculpture of the Children of Lir at Ballycastle, County Antrim

The children knew that to break the spell that they would have to hear the bell of a new God toll in their own land.

Mochua told them all about his new God and all about Saint Patrick who had brought his faith to their country.

The children became excited as they knew that this was the new God their stepmother had told them of. They stayed with Mochua for many years who gave them sanctuary in a small chapel which he had built. He intended to make a bell and collected old swords, shields and other metal to make it. The bell was now completed and was about to be rung when another disaster occurred.

A Warrior dressed in armour entered the chapel. He had come for the children who were famed for their wonderful singing.

‘I am Liargren, King of Connaught’ he shouted,
‘My wife desires those swans and I will have them.
Give them here or I will tear this building down.’

Fionnuala looked at Mochua and then said that they would agree to go away with this King. Liargen was amazed to hear her speak but soon composed himself and ordered his men to take the children away. They were being loaded onto a carriage when suddenly, the church bell tolled loudly.

Time seemed to stand still, but in another instant a great white mist had been blown off the nearby lake and enveloped the children as it had done 900 years before. The mist changed into all of the colours of the rainbow before a great wind gusted it away.

The children had at last been transformed back into human form.

Liagren fled immediately, never to return. Mochua baptized the beautiful children who had begun to age rapidly and so it was that the children of Lir, the last of the Tuatha De Danann died soon afterwards, their legend to live on forever.

The Children of Lir – An article provided by The Information about Ireland Site.

Other retellings of the myth:

Lady Gregory’s ‘The Children of Lir’.

Shauna O’Halloran: The Children of Lir. 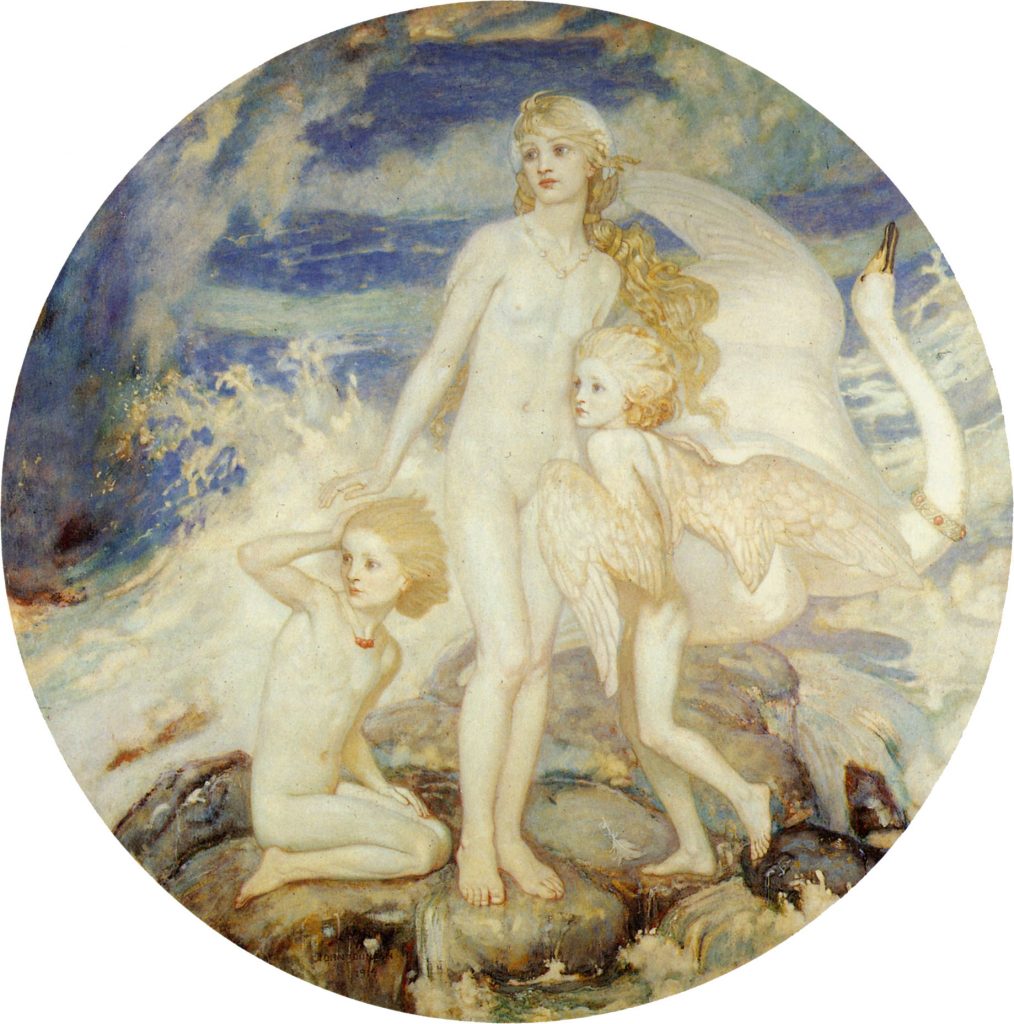