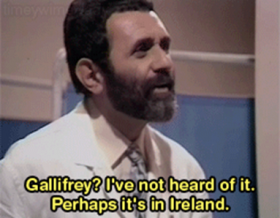 Our Hugo Administrator, Nicholas Whyte, marks the occasion of the 55th anniversary of Dr Who by exploring the series’ Irish connections.

Doctor Who in Ireland

23 November 2018 marks the 55th anniversary of the first episode of Doctor Who. It is a sad fact that not a single second of TV screen time on the show, or any of its spinoffs, has been set in Ireland. Indeed, the Doctor has spent more televised time in Hungary than on the Emerald Isle (special prize if you know what story I am referring to). A couple of confused characters do wonder if Gallifrey, the home planet of the Time Lords, may be in Ireland, but that’s as close as we get. 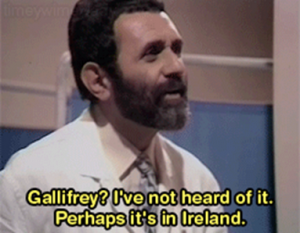 However, the real life relationship between Doctor Who and Ireland is much stronger. Tenth Doctor David Tennant’s grandmother was from Northern Ireland – his grandfather was a professional footballer, whose record of 57 goals for Derry City in a single season still stands. Lalla Ward, who played the second incarnation of Romana and was briefly married to Fourth Doctor Tom Baker, is the daughter of the 7th Viscount Bangor; their family home was Castle Ward in County Down, better known to Game of Thrones fans as Winterfell.

And lucky kids in Belfast and Derry were thrilled one day in 1978 when the Fourth Doctor himself turned up at their school:

There have not been a lot of characters with Irish accents on Doctor Who. (Certainly not compared with Scots.) I make it around a dozen in the 55 years of the show’s history, most recently Susan Lynch as Angstrom in The Ghost Monument, the second episode of this year’s series. 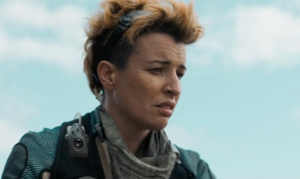 The most prominent Irish actors (so far) to have appeared in New Who must be Ardal “Father Dougal” O’Hanlon, who appeared as a Catperson, Thomas Kincade Brannigan, in the 2007 Tenth Doctor story Gridlock: 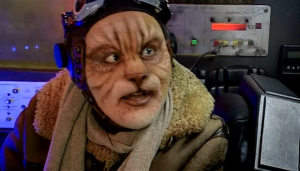 And Dervla Kirwan played Mercy Hartigan, who made the mistake of allying with the Cybermen in the 2009 Christmas special The Next Doctor. 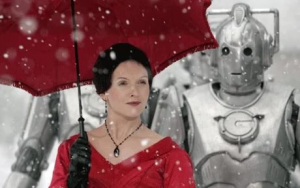 In Old Who (ie on TV before the 2005 revival), the most notable actor to portray an Irish character was probably Harry Towb, who as George McDermott is the first person we see killed by the Master in the 1971 story Terror of the Autons. (He is suffocated by an evil plastic armchair.) 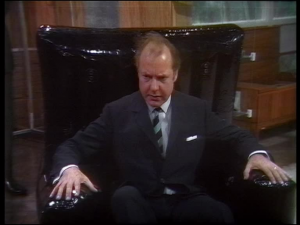 But of course, TV Who is not the only Who. There are hundreds of spinoff Doctor Who books from all eras of the show. Ireland doesn’t feature strongly in any of them; there are precisely two published short stories set there. The most recent is in Twelve Angels Weeping, a collection of stories by irish writer Dave Rudden, published only last month (October 2018); the only story actually featuring the Thirteenth Doctor is “The Rhino of Twenty-Three Strand Street”, about a schoolgirl in Ringsend in south Dublin, in 1966, who finds a crash-landed Judoon. (The first few paragraphs of the final story in the collection are set in Belfast, but with no local colour, and the action moves elsewhere.) 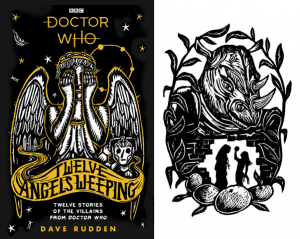 Only one other short story, “Screamager” by Jacqueline Rayner, published in the 2004 Short Trips: Monsters anthology, is set in Ireland, with the Second Doctor and Jamie leaving Victoria in the 14th century, where she has to get to grips with the Black Death. It’s a rather grim piece. 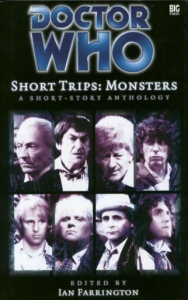 Ireland gets a lot more visibility in the Doctor Who audio plays which have been produced by Big Finish since 1999, featuring all the surviving Doctors. Three of these have been set entirely in Ireland. The earliest, chronologically speaking, is The Book of Kells (released 2010), by Barnaby Edwards (who operates the Daleks on the TV show); in 1006, the Eighth Doctor (Paul McGann) meets King Sitric (Terence Hardiman, aka the Demon Headmaster) in the monastery at Kells, where the Book itself becomes an object of contention between the Doctor, the King and the Abbot (a standout performance by ex-Goodie Graeme Garden). Its full effect depends a bit on appreciating the continuity between the Eighth Doctor’s then current audio companion (Tamzin, played by Niki Wardley) and her predecessor (Lucie, player by Sheridan Smith), but it’s a fun piece. 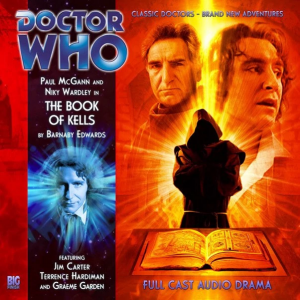 (I should also mention here that the more recent Dark Eyes series of Eighth Doctor audios which started in 2012 feature an Irish companion, first world war nurse Molly O’Sullivan, played by Ruth Bradley, who was also Emily Merchant in Primeval and Karen Voss in Humans. Her third story, Tangled Web, is partly set in her childhood in Ireland, in 1893.)

Grim rather than fun is the best word to describe The Settling (released 2006), by Simon Guerrier, in which the Seventh Doctor (Silvester McCoy) and TV companion Ace (Sophie Aldred) along with audio companion Hex (Philip Olivier) find themselves at the sieges of Drogheda and Wexford in 1649, facing Cromwell (played by Clive Mantle, who was Little John in the 1980s Robin of Sherwood and more recently Greatjon Umber in Game of Thrones). It’s one of the rare purely historical stories, with the Doctor and friends witnessing but unable to change the horrible course of events. It’s difficult for a concept like Doctor Who to tackle tough historical subjects like this – but of course we have now seen the Thirteenth Doctor meet Rosa Parks in Alabama, and deal with the Partition of India, so perhaps the possibilities are more than I thought. 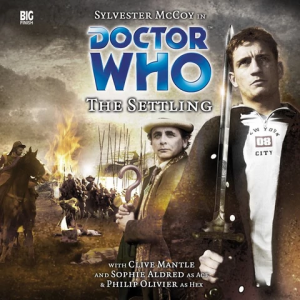 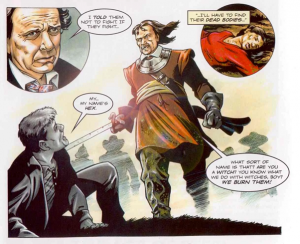 Most recently, both in historical setting and in release order, Iterations of I (released 2014), by John Dorney, takes the Fifth Doctor (Peter Davison) and his TV companions Tegan (Janet Fielding), Nyssa (Sarah Sutton) and Adric (Matthew Waterhouse) to an island off the Irish coast in 1981 (ie contemporary with their TV stories). On the island, a mathematical cult has taken up residence in the deserted house, and then mysteriously disappeared; the Tardis crew teams up with locals (led by Aoife, played by Sinead Keenan, who was also Nena the werewolf in Being Human) to find out what exactly was going on. It’s effectively a clever maths concept story, set in a haunted house. It won the 2015 Scribe Award for Best Audio, presented by the International Association of Media Tie-In Writers. 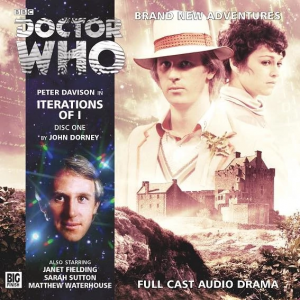 Comics and other spinoffs

Finally, there are many Doctor Who comics as well, but literally the only Irish reference I have found is in the 2007 story “Death to the Doctor!” (available in The Widow’s Curse) where a number of second-rate enemies of the Doctor get together to plot revenge. Questor, defeated long ago by the First Doctor, is explicitly Irish.

And the very first reference to Irishness in Doctor Who by our timeline is in one of the first spinoff books, The Dalek World, published in 1965. In “The Five-Leafed Clover”, probably by David Whitaker, the show’s first script editor, an interplanetary trader, Pat Kelly, manages to pull a confidence trick on the Daleks, mainly with a “don’t throw me into that briar patch” routine. 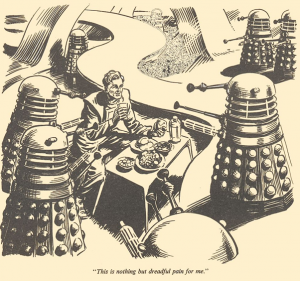 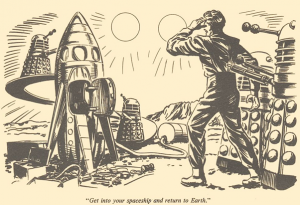 We have moved on from that, I hope.