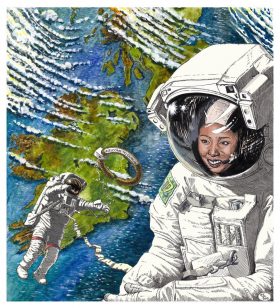 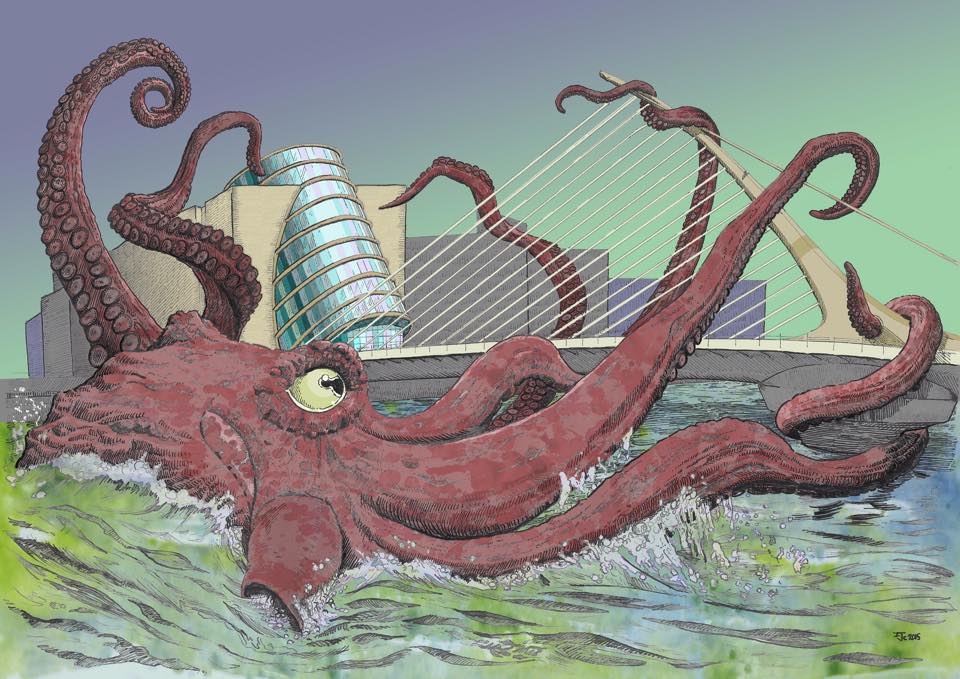 You may have noticed Iain’s work already; on our flyers and posters, at our tables, or maybe you were lucky enough to get one of our postcards of Mae Jemison; the first black female astronaut. He’s everywhere, and we love his work! Iain’s our chosen one for The Chat today!

What are you working on now? What excites or challenges you about this project?

I’m currently providing artwork to support the Dublin WorldCon bid. It’s been a creative kick in the pants in the best way. I’ve always found it easiest to create pictures for a purpose, and supporting Dublin’s bid has been a great muse. My work has always had a genre slant and WorldCon is surely the ultimate genre convention so I’m delighted to be able to illustrate the bid. 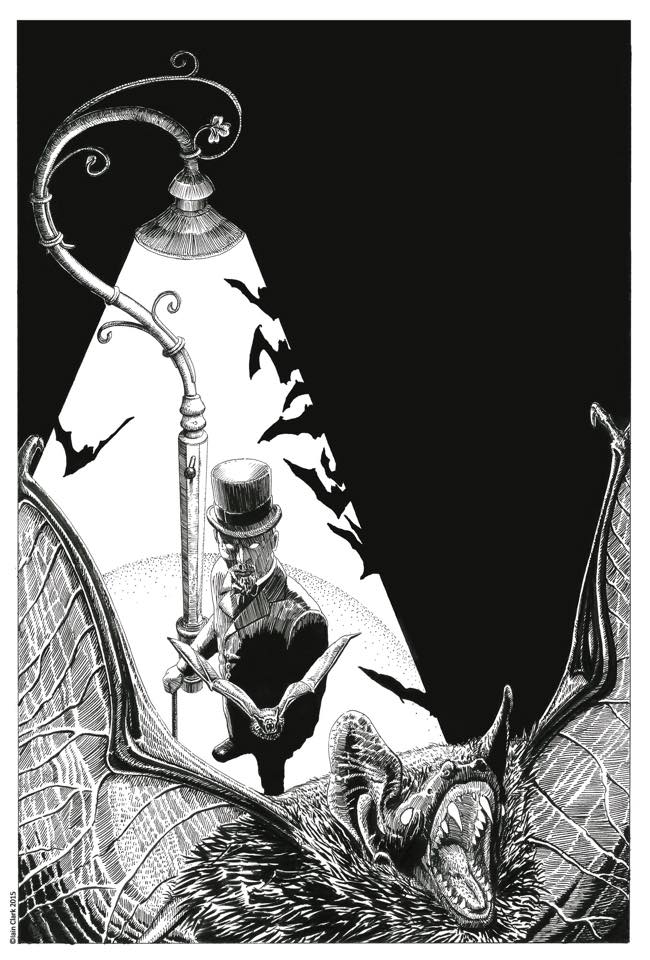 A moody shot of Dublin at night…complete with a bit of Stokerism!

The trickiest part is representing Dublin and Ireland in a recognisable way without resorting to cliché. That, and getting the Kraken to sit still in the bath while I sketch it. I asked an Irish friend what defined Ireland and he said “irreverence”. I went with spaceships.

I’ve drawn extensively since I was kid in the 1970s. My drawing (much like my writing) started as homages to things like Doctor Who and Star Trek and developed into original work. I grew up reading the Doctor Who Target novelisations and apeing the Doctor Who art of Chris Achilleos, Frank Bellamy and Andrew Skilleter. At one stage I think I was convinced that illustrating Doctor Who would be the perfect career. Later I went through a productive phase of fantasy and Tim Bradstreet­ influenced vampire art for local and national Live Action Role­playing events, which feels like it sits somewhere in WorldCon’s family tree. If I’m honest, I find writing much easier than art. Writing is logic, art is emotion: a tempestuous rollercoaster of highs and lows. But I love it.

Oddly one thing that really helps me when I’m stuck with a design is to ask myself the (faintly self-deprecating) question “what would a GOOD artist do?” It’s a helpful trick for getting off the conveyer belt of being you and trying to think differently about a creative problem. We all know good drawing and writing when it’s in front of us. Sometimes we just need to get our own habits and preconceptions out of the way. 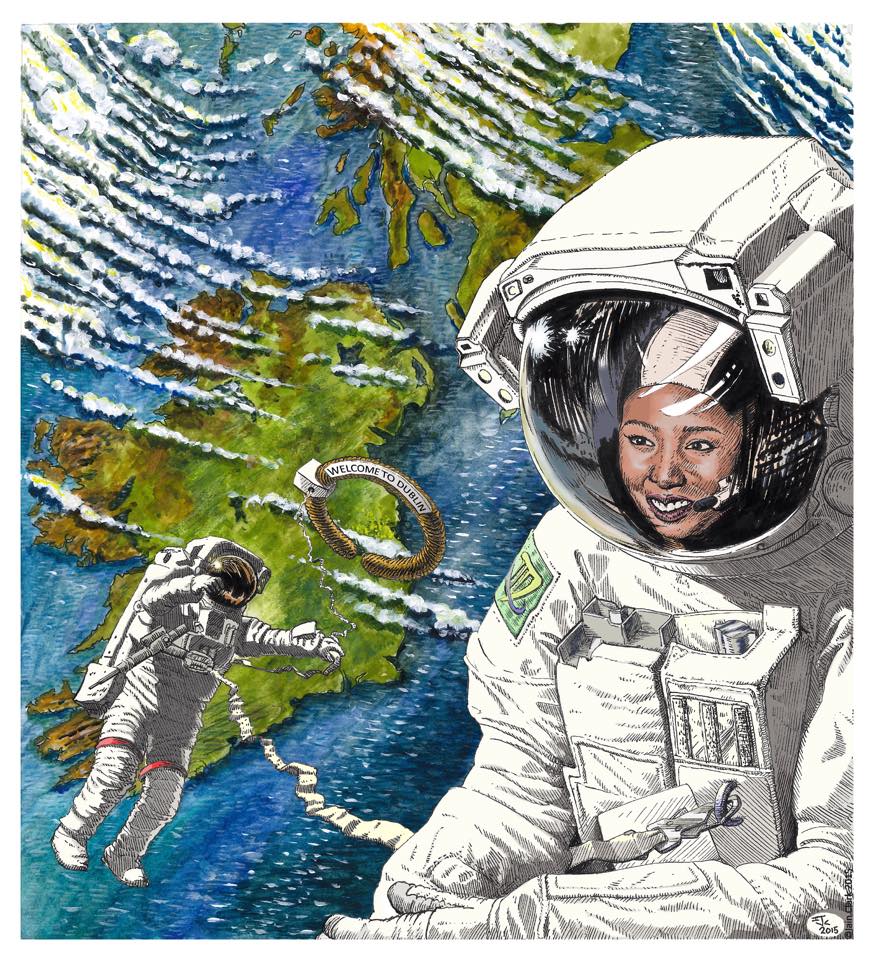 If you could recommend a book to your teenage ­self, what book would you recommend?

‘The Demon­Haunted World: Science as a Candle in the Dark’ by the great Carl Sagan. There are many other pop science books out there debunking pseudo­science and logical fallacies, but this was the first one I read. I don’t think any non­fiction book had ever chimed with me so completely. It clarified a lot of things I already thought about the world, science and rationality but had never properly articulated. I think cultivating an effective bullshit detector is so helpful in life, not least navigating the stormy seas of internet debate and spotting logical fallacies as they sail over the horizon.

What would you like to see more of from the science fiction genre ­either in print, film or television?

More diversity, although at this stage that feels a bit like asking for world peace. More women in stories; a greater variety of different types of women. You watch so many dramas;­ SF or otherwise ­and there’s maybe one female character. If there’s two, it’s mainly so they can run the full gamut of hair colours. The same goes for racial diversity, diversity of sexuality and gender.

Just do it. Difference exists, so represent it, and in doing so you give people the gift of seeing their own experience in fiction, you’re more realistic, and you gradually change the mainstream perception of what’s ‘normal’. Shows like Orphan Black are remarkable exceptions, but I don’t see the default white, male, straight paradigm of TV and Movies changing very quickly. Statistically the lead character in an SF movie is far more likely to be a wisecracking white male jerk than anything else, which is a little bit depressing. Does that make me a Social Justice Warrior? Well okay then. 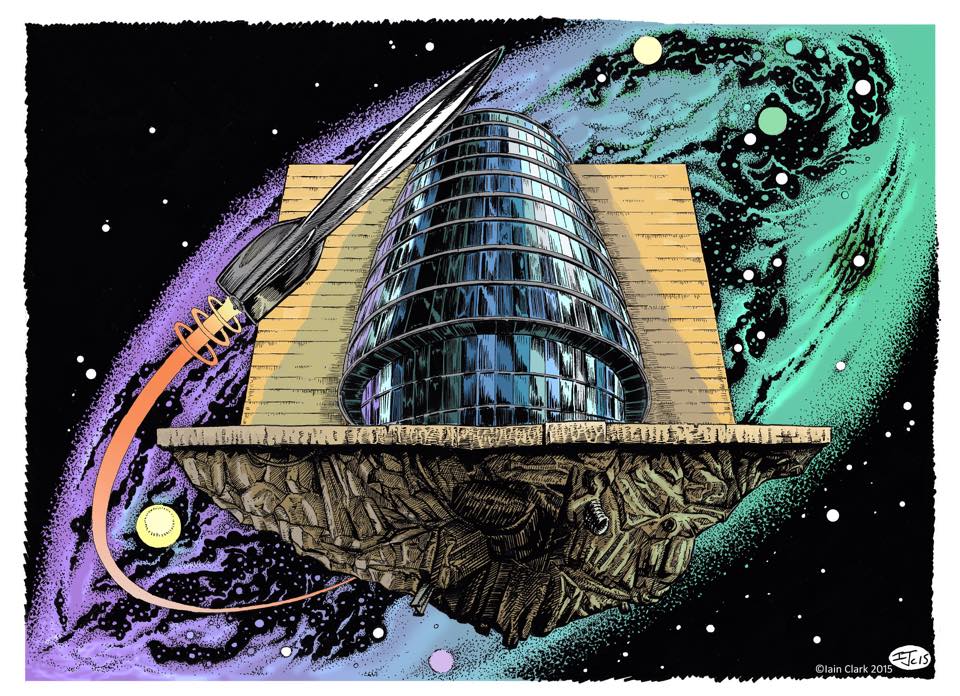 Third Rock from the Sun? Or just the CCD…?

Do you have any advice for first time convention attendees?

My first WorldCon was way back in the heady days of London in 2014, which means that I basically *am* a first time convention attendee. It was an immersive hug of an experience (http://iainjclark.livejournal.com/234980.html) and I can’t wait to do it again.

My main advice would be to stop and enjoy it! My wife and I went in with a detailed itinerary of must­ attend panels, signings and events that left (almost literally) no time to eat, drink or sleep. It gets to the point where you feel a vague sense of injustice at all the cool­ sounding events you can’t fit in. It didn’t take too long to realise that unless we dropped out of a few things we’d never survive. Doing that is what led us stop, breathe, browse, socialise, reflect and actually experience the convention.

Why do you support the Dublin 2019 WorldCon bid?

I think WorldCon should be a worldwide convention, and that means striking a balance between the US, Europe and all the other places in the world where fandom flourishes. I think it’s surprising that WorldCon has never been to Ireland in all its venerable history. Dublin has the perfect mix of rich cultural heritage, a European setting and strong ties to the US. I can’t wait to visit. (At this point I’ve drawn the conference centre so often I imagine it’ll be like Roy Neary seeing Devil’s Tower for the first time in Close Encounters of the Third Kind.) 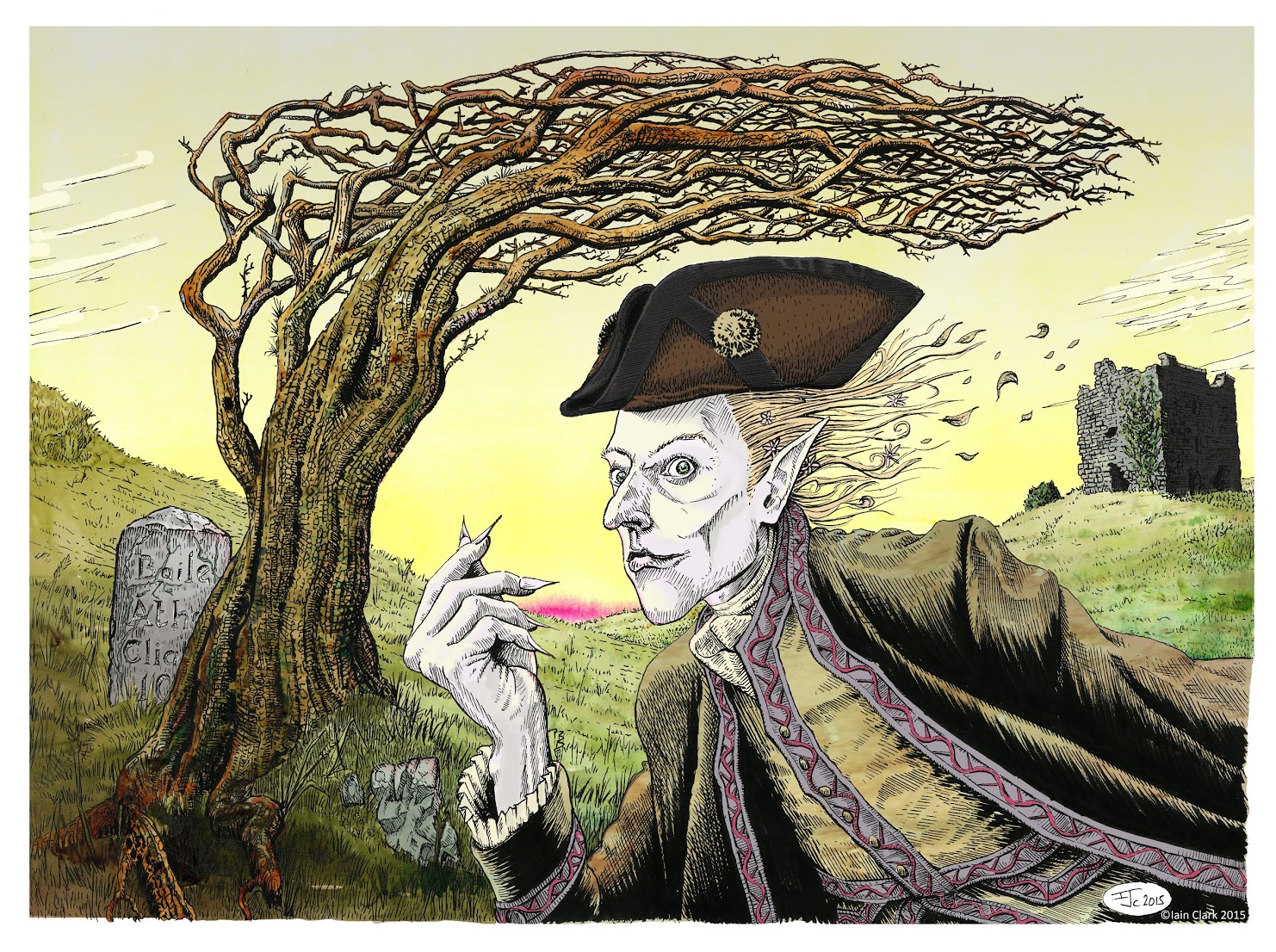 Mystic roots for this wonderful image of one of the Sidhe

Iain Clark watched the Apollo 11 moon landing from the womb (or so his mother claims) in the same year that Star Trek was cancelled and Patrick Troughton left Doctor Who. Despite these not insignificant setbacks he somehow became a lifelong fan of science fiction. (On one notable occasion his “What I did over the summer holiday” school report consisted entirely of a ten page synopsis of Star Wars.) He has reviewed TV and film for Strange Horizons, and was a panel member at LonCon 2014 discussing the Hugo Best Dramatic Presentation (Short Form). He currently fits drawing and blogging around the capricious whims of his young daughters.