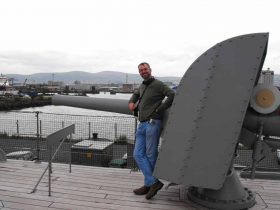 Despite visiting Belfast every year of my childhood to see my Barrett Grandparents, until recent times, I was blissfully unaware of the existence of the Royal Navy warship, HMS Caroline. What makes this vessel worthy of interest? Her vintage. For unlike the floating computers that make up the modern navies of the world, with their mass of technology, Caroline stands out. A hundred years young and last surviving witness of the greatest clash of the dreadnought battleships in history – the Battle of Jutland.

We live in an age of computers, of radar, satellite communications and other technologies it is hard to imagine life without. Caroline however has none of these things and offers an glimpse into not just the technologies of another age, but the social values of that time.

Caroline was the first in a series of twenty eight ships built to broadly the same design and known as the C Class Light Armoured Cruisers. At one hundred and twenty eight metres long and over four thousand tons displacement, they were mid sized vessels by the standards of the day. Each was large enough to operate independently, or join the main fleet. Ordered in 1913, all would serve during World War One, acting as the eyes and ears of the Royal Navy as it searched for the German High Seas Fleet. On the 31st of May 1916, when the Germans came out, Caroline was part of the 4th Light Cruiser Squadron and would witness the clash between two the largest fleets of dreadnoughts ever assembled.

Post war, Caroline was disarmed, had some of her boilers removed and moored in Belfast to act as a drill ship, to help train successive generations of sailors. It was in this capacity she soldiered on, through a second global conflict, long after the last of her sisters went to the breakers yard. Although never again seagoing, Caroline did make a break for the oceans in the storm of 2005, when she ripped several bollards out of the concrete! Only in 2011, close to a century after her creation, did the navy finally decide they no longer had a place for Caroline.

There were fears that she might follow her sisters to oblivion or leave Belfast forever to join the historical ship collection in Portsmouth, England. Fortunately Caroline would be saved, and remain in the city she’d called home for decades. Now berthed a few hundred metres up the road from the dockyard where the world famous Titanic was built and partly restored to her original appearance, Caroline was opened in 2016 as a museum ship.

So as we look at her now, what do we see? From the outside an old ship certainly, with archaic technology but what about inside her steel skin? Inside we get both a glimpse into a world a hundred years gone and what she would have represented.

In service, Caroline wasn’t just a ship or even a military unit. She was home, to over three hundred men – the idea of women sailors being simply incomprehensible at the time. This was a world of firmly defined social strata. For the enlisted men, hammocks and mess tables not far removed from those of Admiral Nelson’s fleet of a hundred years previous. Although the food at least had improved.

For the senior enlisted, a half wall to separate their mess from the lowest ranks – a jealously guarded privilege!

While for the officers, some more homey touches of table cloths, fine china –

and bunks instead of hammocks.

Beyond what we can see with our eyes, there is what she would have represented – the manifest demonstration of the march of technological progress. Less than a hundred years prior, ships powered by only the wind and human muscle would do well to move faster than a man could run, while armed with black powder guns capable of pitching a crude cannonball only a few hundred metres. A product of the post industrial revolution world, Caroline was capable of the reliable miracles of the modern world, faster than a champion race horse and capable of throwing projectiles many kilometres.

As far beyond her own predecessors, as we are beyond her. In an age where we speak of how fast the world moves, Caroline represents a reminder that progress is not a modern invention.

HMS Caroline is located two hours drive from Dublin in the Titanic Quarter of Belfast city and a few hundred metres away the Titanic Museum, which also includes the tender SS Nomadic. They offer the opportunity for a day trip that will have something for everyone and who’s like will not be found anywhere else.

Edmond Barrett is a writer, civil servant and if you can believe it, massive military history nerd. His first series, The Nameless War concluded in 2014, he has also dabbled with stories in time travel and urban fantasy. His current work in progress is about first contact and he hopes to publish in 2019.