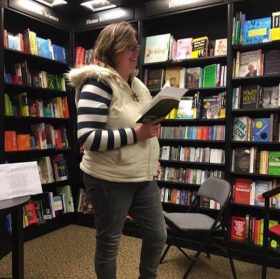 Hi. I’m waving from the North of Ireland, land of giants and myths and, more recently, Game of Thrones.

I can see why much of Game of Thrones has been filmed in this landscape. It’s a land of contradictions, soft and fairy-like with glens and waterfalls, bleak and hard in other parts.

The sea crashes, a constant barrage of force. The land itself is formed of hard basalt. Even the voices are hard-edged, far from the softer Southern brogue. It’s a land, historically, of conflict, of division, a place that has its own identity (often more than one) and traditions, not unlike Westeros.

It’s also a welcoming land, that likes to see visitors and get a chance to show off what few see of Northern Ireland. And so it is that I’m delighted to visit the blog and take you on a virtual tour of locations used in the show. I’ve concentrated on those sites on or near the Antrim coast road, but there are sites in Belfast at Harland and Wolff and in County Down.

Some miles north of Belfast, via an easily followed road, a highway stretches along the coastline. It hugs the sea, twisting and curving, framed by cliffs and surf. It flows through villages and towns, giving a sense of connectedness that very much belies its history – before the road was built, this was a part of the world difficult to get to, cut off by the high glens not just from the rest of the country, but from the nearest towns. It’s a land that was more accessible by sea and, with Scotland only 14 miles away at the shortest point, it has links to the Scots as well as the island around it.

Along the road are some of the most iconic settings from the show. Driving past Carrickfergus, with its intact medieval castle, towards Larne, you pass Magheramourne. There’s little to evidence GOT here but, behind the high walls of the quarry, Castle Black is hidden. From the other side of the peninsula – an area named Islandmagee, famous for its series of cliffpath walks, The Gobbins – the quarry can be seen, a white walled scar on the landscape.

From here, it’s a good drive up the coast – and I do mean good. Rated one of the best coastal drives in the world, the road twists and curves its way north. On a good day the sun over the sea almost blinds you. On a bad day it will be the sea hitting your windscreen that might. Either way, the smell of the fresh brine accompanies you through the drive.

Sweeping through Glenarm and past the Queen of the Glens, Glenariff, the road reaches the small town of Cushendun. Worth an explore in its own right, with iconically designed buildings, Cushendun’s secret can be found by following a road along the side of the harbour. Follow the road round, past apartments high above you, and you’ll find yourself coming to a cave system. Keep going, past the sea rattling in to shore, through a dark cave and you’ll reach a set of gates, locked and preventing access to the house beyond.

This, then, is the Stormlands, and the place where the Shadow Baby was born, in the depths of this darkness.

From here, you pass place after place linked to the show. Murlough Bay is Storm’s End on The Iron Islands where Davos is shipwrecked. More extensively used was Ballintoy Harbour as Pyke. Viewers will recognise it as the place Theon returned home to.

As you head further north, you begin to reach the areas most frequented by tourists. The Giant’s Causeway – not yet used, but you have to wonder how long it will take – is a must-see. I have an affection for Dunluce Castle, perched on the edge of a cliff, so precariously that it lost its kitchens to the sea in a storm.

Close by is Larrybane, an island reached only by the Carrick-a-rede ropebridge. Not for the fainthearted, after a short walk from the carpark you reach the bridge. Used by the salmon fishermen, the name means Rock in the Road and if you look down from the bridge you’ll see why: the rockbed beneath blocks the road of the salmon returning to spawn.

Once across the bridge and onto Larrybane (where Renly’s camp was in season 2) you get a full taste of the sea. Surrounded on all sides, the sea birds have claimed the island. They circle and dive and cry.

Rounding the road, you pass the seaside towns of Portrush and Portstewart. From here, a detour to Ballymoney takes you close to the Dark Hedges, one of the most iconic shots from the show (The King’s Road, which Arya flees along). These are a little off the road, but heading for Gracehill Golf Club (and following the newly erected brown tourist signs) will see you right. A long avenue of trees – three blew down today in a storm, as it happens – were planted to provide a striking entrance to a well-heeled estate.

For the last stretch of road, head towards Castlerock and Downhill Beach. Presided over by Mussenden Temple – a folly in the grounds of Downhill demesne and well worth a visit – the beach stretches. In the distance you can see Donegal. The Atlantic rolls in and out, crashing against the sands, bringing its power all the way from America.

The drive from Belfast to Downhill can be done in a couple of hours but, to take in the area, I’d recommend staying overnight in one of the pretty coastal towns and taking a bit of time to see around.

If you do come, I hope you enjoy it and that, like me, you can see why the land suits the show so well. 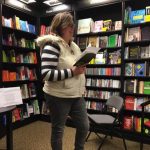 Jo writes science fiction and fantasy, mostly based in her native Northern Ireland. Best known for Inish Carraig, where she destroyed most of Belfast in an alien invasion, she’s currently working on the sequel, in which she turns her attention to the rest of the country. When not writing, Jo is a management consultant.