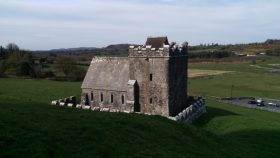 It was a glorious spring day when we set out for Fore Abbey in County Westmeath. This tiny village hides some fantastic medieval ruins, most notably the 13th century Benedictine monastery.

The monastic settlement was originally founded by St Féchín (insert “feck” joke of your choice) in the 7th century, and the ruined church on the site dates from the 10th century. The Benedictines arrived later and built their monastery on the site.

Our first port of call is next to the car park, St Féchín’s tree, which springs from a holy well (whose water is said will never boil). The original tree (whose wood is said will never burn) had a tradition that pilgrims should scratch away some bark and press a coin into the wood. It became known as the copper tree. Unfortunately, both bark removal and having metal pushed into the wood are not particularly good things to do to trees, so the original tree died. A new tree was cultivated from a surviving branch, and as you can see from the photo, people still attach offerings.

We followed the path to the monastery, which gives a fascinating insight into medieval architecture. It was regularly raided by Vikings, so it’s hardly surprising that it’s built like a castle.

The Abbey was founded in the 13th century, though most of the surviving structure is from the 15th. There are lots of places to climb and explore, though the two towers are gated off. Our dog, Leia, really liked climbing to all the high places. 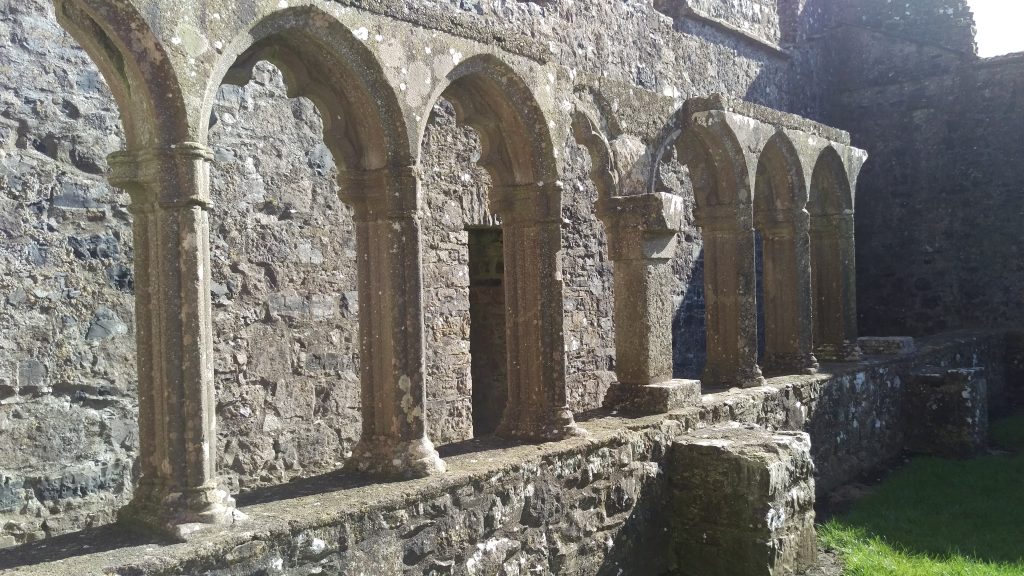 We also explored the area around the Abbey. Some steps lead up to a curious circular structure, that to my eye looked like either a wine cellar or a pigeon roost. There’s also a gate house that looks more recent than the rest of the Abbey. 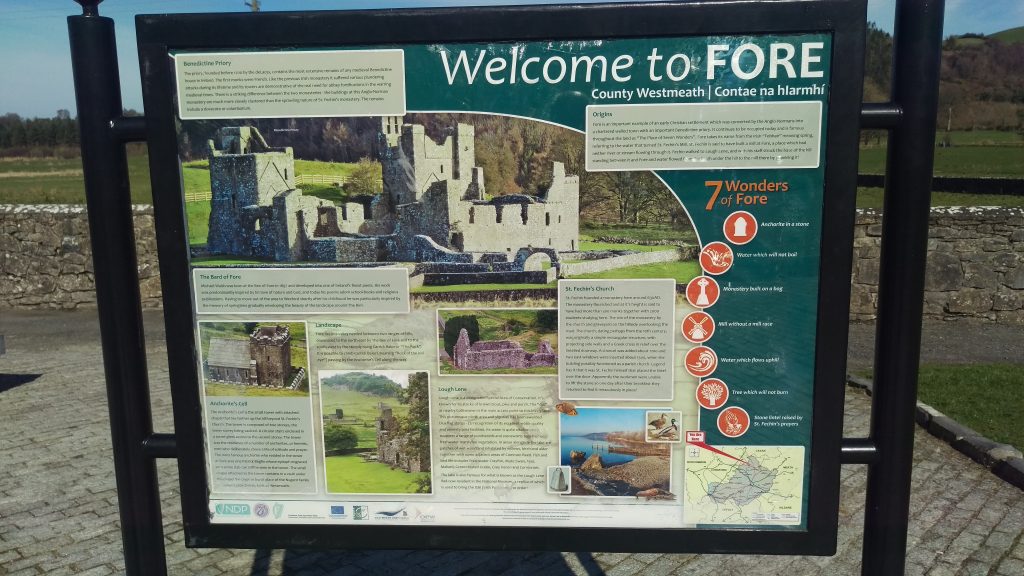 This starts by a small cave, apparently belonging to pine martens. We didn’t see any pine martens, which is probably just as well, as I’m not sure they would get on with Leia.

Next was a ruined cottage, boards over the windows and doors painted with flower pots and a woman looking out the door.

Soon we came to a picnic area, where we stopped for our lunch. As we set off, Leia found something wonderfully smelly to roll in. The trip home would be a joy!

According to the map, there was a Motte and Bailey castle, but we didn’t manage to find any trace of it. This picture shows where we think it might be.

We passed the village school, then back through the centre of the village where we parked. There was a shrine to saint Féchín by the local church (the modern one that’s still in use, not one of the four ruined ones). And, of course, no Irish village would be complete without a pub.

Across the road from the Abbey is the ruin of Saint Féchín’s church, one of the oldest structures on the site, which Leia enjoyed climbing around.

Nearby is an anchorite cell, though what we thought was it looked rather fancy, and we now think this is another chapel, so the cell must be somewhere else.

We then climbed up the hill to a rocky outcrop. There was a fantastic view from the top, though we didn’t go quite to the top as it was covered in gorse bushes.

We then made our way back to the car for a rather smelly trip home to bath our dog.

Fore is a fantastic site to visit. It’s only an hour and a half from Dublin, and relatively unknown, so there aren’t too many other visitors and you can enjoy the solitude. It’s also amazing to be able to get up close to buildings so old. The Abbey may be “only” 600 years old, but Saint Féchín’s church has stood for over a thousand years.