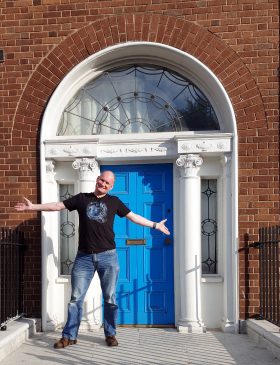 The Georgian period ran from 1714 to 1830, under Kings George I to IV, and was very influential on Irish history and on Dublin’s development. Much of Dublin’s most important architecture was built during this time, not least its famous Georgian Squares.

These squares were not just pretty parks, they were the entertainment multiplexes of their day, laid out with pleasure pavilions where theatrical and musical performances took place, and the wealthy could eat and socialise. Having an address facing or adjoining one of the squares conferred significant social standing, and such sites could be sold or leased at a significant premium over less desirable sites.

Today we take you on a whistle stop tour of Dublin’s Georgian Squares, most of which are easily visited from the Worldcon venues.

Our first stop is not actually a Georgian Square, but actually much older. It takes its name from the House of St Stephen, a Leper house founded in 1192, and was originally an area of common land for animal grazing. By 1610, it was already enclosed by streets, and in 1664 it was taken over by Dublin Corporation and enclosed by walls. Land surrounding the green could be leased from Dublin Corporation for one penny per square foot.

However, many of the early developments were rebuilt during the Georgian period, and many of the buildings from the period still standing today, with very fine examples on all four sides, and an unbroken terrace of fine Georgian houses still running the entire length of the East side.

Among the fine buildings on the square is the Royal College of Surgeons, established by royal charter in 1784, it did not have its own premises until it acquired its site on Stephen’s Green.

The original walls of the park were replaced by railings in 1814, and it opened to the public in 1880.

During the Easter Rising of 1916, rebels led by Constance Markievicz took up position in Stephen’s Green and a pitched battle was fought for most of the rising. However, a temporary armistice was agreed to allowed the groundskeeper to feed the ducks. A bust of Markievicz can now be found in the park.

The oldest of Dublin’s actual Georgian squares, Parnell Square was originally named “Rutland Square” and was conceived by two men, Dr Bartholemew Mosse and Luke Gardiner. Dr Mosse leased four acres to build a “lying-in” hospital for less wealthy residents of the city. To fund his hospital, he developed the square and sold plots around it.

At its height the square had its own orchestra, and the former entertainment pavilions were developed into the Gate Theatre and the Ambassador Cinema (no longer a cinema).

One of the finest houses built on the square was built for Lord Charlemont by renowned architect William Chambers, which is now home to the Hugh Lane Gallery. Next door to this is the Dublin Writers’ Museum, which is well worth a visit.

The hospital became the Rotunda Maternity and gradually expanded to take over much of the area of the square. A strip along the northern edge became the Garden of Remembrance. Originally this was dedicated to Irish Men and Women killed in the 1916 rising, it has since been rededicated to remember Irish citizens who died in all wars.

There are current plans for Parnell Square to be the centrepiece of Dublin’s new cultural quarter, with a new central library next to the Hugh Lane Gallery. Unfortunately these plans have run into funding difficulties, but hopefully at least the new library will get the go-ahead.

Perhaps the finest and best preserved of Dublin’s squares is Merrion Square, originally laid out in 1762 when James FitzGerald, the Earl of Kildare (who later became the Duke of Leinster) selected to build his house, now Leinster House, on the south side of the city. Prior to this, the north side was the fashionable area, but many landowners followed him and by 1800, the streets around Merrion Square were amongst the most fashionable to live in.

Leinster House was was sold in 1815 to the Royal Dublin Society. In 1922 it was leased by the newly formed Irish Free State government, and eventually bought outright, and is still home to the Irish Parliament. Adjacent to it are the National History museum and the National Gallery (and around the other side, on Kildare Street, the National Museum and National Library).

The park was only open to residents who had a key until the 1960s, but has since been taken over by Dublin Corporation and turned into a public park. It is now home to a number of monuments, including a statue of Oscar Wilde (who previously lived across the road in number 1). Other famous residents include W.B. Yeats and Daniel O’Connell.

The south side of the square formally housed the Dublin Institute of Advanced Studies, where Erwin Schrödinger was employed from 1940 to 1958. Schrödinger, an outspoken critic of the Nazis, was fired from the university of Graz for “political unreliability”, and received an invitation to come to Dublin to head up De Valera’s new institute, which he accepted. He became a naturalised Irish citizen, though he retained his Austrian citizenship.

While Merrion Square was attracting wealthy nobles south of the Liffey, the north side wasn’t going to give up without a fight, and in 1787 Luke Gardiner laid out a new square, a short distance from Rutland (Gardiner) Square. Originally called Gardiner Square, it was renamed Mountjoy Square when Gardiner became the 1st Viscount Mountjoy in 1795.

It is the only one of Dublin’s Georgian squares that is actually a square, with each side 140m in length. The houses are a uniform design, with the latest modern design features of the late 18th century, such as coal holes built into the pavement to allow coal to be poured into underground bunkers, minimising mess.

During the 19th century, many of the wealthier residents left, and many of the buildings were subdivided into tenements occupied by many families of lower social standing. Often these were poorly maintained, and the condition of the buildings deteriorated. A number of buildings were demolished around the square in the mid 20th century, particularly on the southern side where only three original houses remained. At one point it looked like large parts of Georgian Dublin might be set for demolition. Thankfully, thanks to the intervention of wealthy benefactors, the frontages of the demolished houses have since been restored, and the square restored to its former glory, even if the interior of many of the restored houses is not the original design.

Notable residents included playwright Sean O’Casey, who lived at number 35. All three of his Dublin trilogy plays were set in tenement houses, clearly inspired by the square.

A short distance to the south of Merrion Square lies Fitzwilliam Square named after Irish Viscount Richard FitzWilliam. It was laid out in 1791 and received strong early interest. However, due to wars with France and concern about the impending act of union, only four houses were built by 1797, and it would take another 30 years to complete.

Despite this, the houses surrounding Fitzwilliam square are remarkably consistent architecturally. While smaller than the other squares, it is fully enclosed by fine terraced houses, and features some of Dublin’s finest Georgian architecture.

Perhaps the most photographed of Dublin’s famous Georgian doors can be found at number 46. Curiously, the door itself is not from the Georgian period, but is actually Edwardian, having been replaced nearly 100 years after the death of George IV.

The park itself is not open to the public (for a time there was a lunchtime food market on Fridays, but this isn’t currently running).

Artist Jack B. Yeats lived in number 18 from 1929 till his death in 1957. The Jameson family, famous for their whiskey, also had a house on the square.

After the Act of Union in 1801, Ireland no longer had its own parliament or House of Lords, and many nobles no longer felt the need to maintain a house here. Many of those who still came to Dublin opted to sell their large properties and keep a smaller house that was easier to maintain. The suburbs of Ranelagh and Rathmines sprang up and became popular with the downsized wealthy class.

Mount Pleasant Square (which is not even remotely square in shape), was established by Terence Dolan, a glove maker from Chester, in 1807, and development carried on until the 1830s. Houses on the square are mostly two and three story houses over basements, built in the style of miniature versions of the Georgian terraces of the city centre.

The central gardens were originally built for the residents to enjoy, but proved two costly to maintain for the more middle class residents, and it was eventually sold. It now houses the Mount Pleasant Lawn Tennis Club. A small strip of of park remains on the eastern edge. This was threatened with development into a garage in the 1990s, but thanks to public outcry, the development was prevented and it is now a public park.