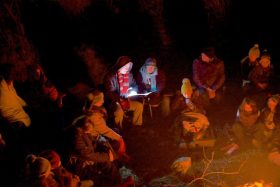 Lough Boora Discovery Park is way out in the middle of nowhere, which is where the best bits of Ireland can often be found. It’s a cutaway raised bog in County Offaly, somewhere between Birr and Tullamore, and can be reached by a narrow road that will severely punish the suspension of any vehicle you might happen to be driving and sternly chastise the limbs and ligaments of anyone inside that vehicle, so for the last stretch, go easy, for your own sake.

Bogs are a thriving and complex ecosystem, so naturally, we exploited the hell out of them, utterly devastating said ecosystems, and now only a fraction remains of the great raised bogs of Ireland. Various projects are ongoing to restore boglands, and they can be visited and their boardwalks traversed and you can soak up the sights of bog cotton and sphagnum moss. What’s different about Lough Boora is the art project that was undertaken in 2002. A number of sculptures were devised and installed by artists throughout the bog using materials to hand, including some left behind by the industrialised harvesting of peat for fuel. The result is a meandering walk that has something odd, strange and surprising around every turn.

We visited in October, when things were quiet and the air was cool. We’ve been in summer, and the ground tends to soak up and radiate back the heat of the sun, so it can feel a bit like being barbecued at times. We had a late lunch of toasted ham and cheese sandwiches at the cafe, sitting out on the deck and looking at the lake, admiring the little boats and the gleaming metal crown-like sculpture on the island, visited by a few fearless little birds looking for crumbs.

A bike hire service provided a few serviceable boneshakers. The roads and paths are mostly quite flat and level, so cycling isn’t too much of challenge, but it’s worth taking the time to get a bike that suits you. We then set out on a a gentle tour of the sculpture park and the Neolithic route. There are many old trains lying around, once used to carry loads of cut turf out of the bog, and the nine-year-old was unable to pass even one of them without stopping to take it for a drive. The most spectacular example is the Sky Train, lying atop a curved section of track on a bank of raised earth.

Past woodlands full of willow and birch and alder, along flooded ditches, through wetlands thronged with reeds, everything reddish and russet in the late Autumn sun, a windmill turning in the distance, sending me reaching for some metaphor about the ancient and the modern that I never quite managed to nail down. An hour’s bike hire passed surprisingly quickly as we stopped to examine sites and sights and sculptures every few minutes, and if we’d arrived earlier with more light left in the evening we wouldn’t have noticed the time passing.

Apart from the sculptures, there are fairy trails for the young, angling for the fishers, the mesolithic archaeological site, extraordinary works of art and craft like the Gathering Of Stones, hides for birdwatching and more history, biodiversity and art gathered in one place than you could ever have thought possible. There are assorted events on throughout the year, so do check out the website in advance to see if any coincide with your visit.

We returned our bikes and while the sun sank down and the air grew chill and the nine-year-old had one last drive of the old bog train painted to look like Thomas The Tank Engine, we sat by the lake and watched as swans flew by low overhead in a great arc around us and the fish rose to feed sending ripples and splashes across the mirrored surface.

Nigel Quinlan spent his summers in the bog, drying and packing turf for winter fuel. Now he’s a children’s writer living in Tipperary, author of The Cloak Of Feathers and The Maloneys’ Magical Weatherbox. He tweets @Nigellicus.