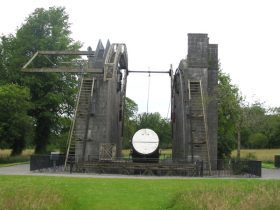 Here we continue Nicholas Whyte’s tale of the Leviathan of Parsonstown; the largest telescope of its time, and the story of the political and social struggles that surrounded it. (Last week’s part 1 is here). This is part of an ingoing series by our Bid Team members and Volunteers that highlights aspects of SF/F/H culture in Ireland and beyond. If you are interested in writing for us, do let us know at admin@dublin2019.com, and we hope you enjoy the read!

None of the construction and use of the Leviathan can be separated from its political context. The Parsons family had dominated Birr since 1620, when the town and surrounding territory was expropriated from the ancient ruling family, the O’Carrolls, under James I. The wealth that funded the telescope was unearned income from the tenant farmers of the fertile lands of Offaly. The third Earl himself had a brief and undistinguished career as a member of parliament, representing the interests of his own class: here for instance is an 1833 debate where he is torn to pieces by the Irish Catholic leader Daniel O’Connell for seeking state money to pump into a hi-tech instrastructure project (the Dublin-Dun Laoghaire railway). Technology and science, for the Parsons family and their relatives, were means of consolidating their own economic power over the majority of the Irish population.

The Leviathan itself was specifically built in order to investigate nebulæ, the cloudy patches in the night sky that had been catalogued by Sir Wiliam Herschel and Charles Messier – many are known by the M numbers assigned by the latter. We know now that some nebulæ are made up of stars that are simply too far away to see distinctly with the naked eye; examples include both galaxies external to our own Milky Way, like M31 (which we now call the Andromeda Galaxy) and the Magellanic Clouds; and globular clusters in our own galaxy such as M13 in Hercules. Others, however, are clouds of glowing gas, either where new stars are being formed, as in the famous “Pillars of Creation” photographed by the Hubble telescope in the Eagle Nebula, M16 in Serpens; or where an old star has died, such as M1, the Crab Nebula in Taurus, which is now believed to be the remnants of a supernova observed by Chinese astronomers in 1054 (more on that below).

We know now that what Herschel and Messier called nebulæ are in fact several different types of object, which all look very similar to us unless we use a telescope or binoculars. But in the early nineteenth century, it was tempting to look for a single explanation. The idea that new suns and planets are constantly forming from clouds of gas and dust (as in the Pillars of Creation), known as the “nebular hypothesis“, had been popularised by trendy philosophers and writers – Immanuel Kant had it set out in detail in 1755, Pierre-Simon Laplace gave it mathematical legs in 1796, and most importantly in 1844 Robert Chambers had published anonymously Vestiges of the Natural History of Creation, which tied together the nebular hypothesis with other scientific theories and radical political ideas to form a liberal political manifesto rooted in his interpretations of empirical discovery. Putting it simplistically, the universe is gradually evolving to become a better place, and we can do the same with our own human societies.

Conservatives were revolted by this revolutionary concept. This was not a completely new debate – in 1833, William Whewell viciously attacked the nebular hypothesis in one of the Bridgewater Treatises. For them, the universe, divinely created and ordained, demonstrated the existence of a loving creator deity establishing beautiful systems which are already perfect and incapable of improvement. Vestiges of the Natural History of Creation was hugely controversial at the time (though this has been somewhat overshadowed in historical memory by one of the scientists it inspired, Charles Darwin) and reached the highest levels of Victorian society. It was a new threat to the old order. Conservative scientists and writers objected to the co-option of science to try and prove liberal politics, and rushed to unpick the details of Chambers’ arguments.

It should now be clear why the nebulæ were so important. The notion that they are clouds forming new systems was one of the fundamental arguments not only of liberal scientists but also of liberal politicians. If it could be shown that many more of them were “resolvable”, that they were in fact made of stars too far away to be seen, a key support for the new ideas would be knocked away and conservatives could be heartened. We can see some naked-eye clusters of stars in the sky such as the Pleiades and the Hyades, and back in 1609 Galileo observed that the Beehive Cluster (also called Præsepe) in Leo is easily resolvable into stars with only small magnification. Perhaps the others are just too far off to see clearly? The only problem is that to examine the nebulæ in detail, you would have to build the biggest telescope ever made. Which is what the third Earl of Rosse duly did. 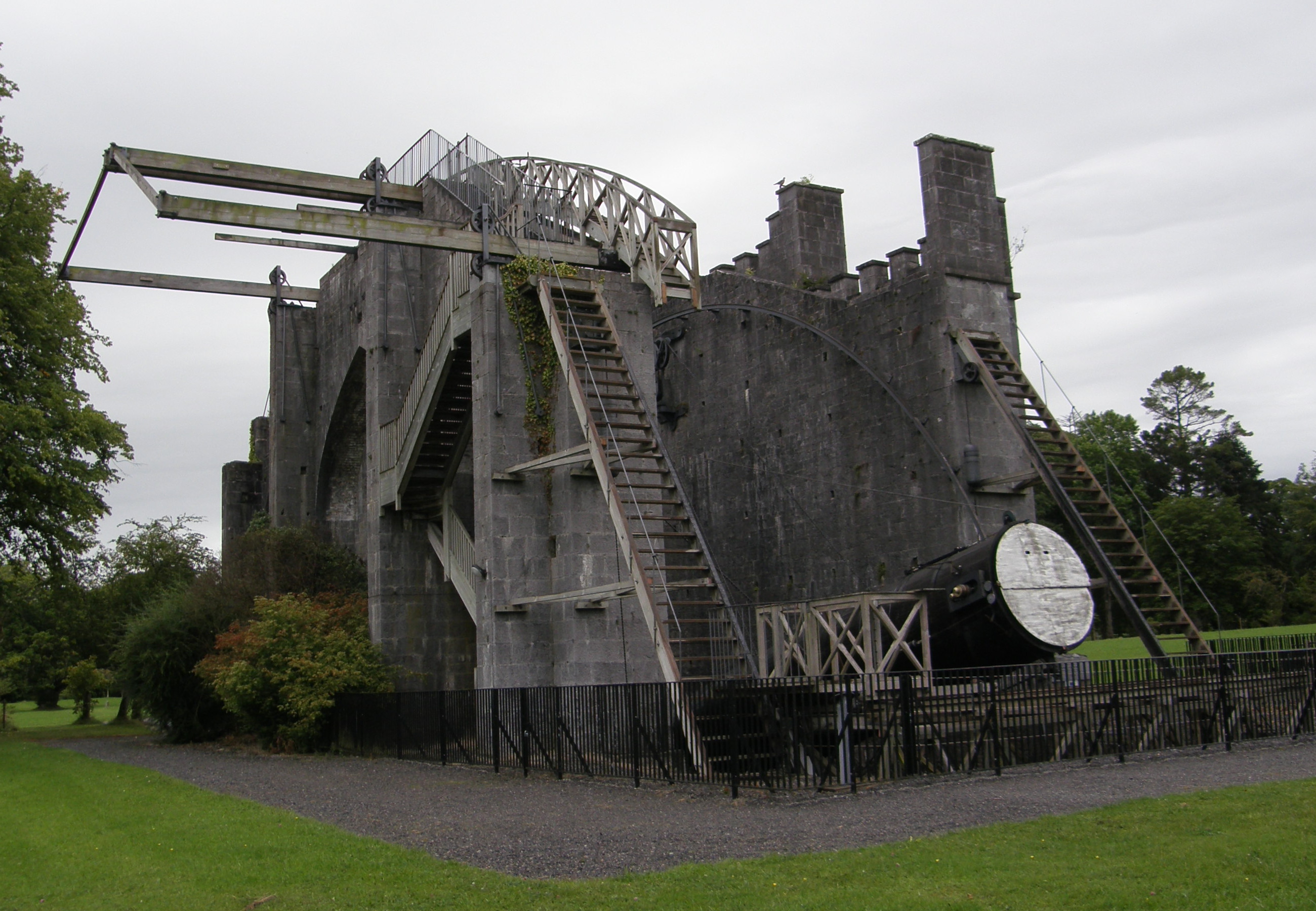 The three-foot diameter Birr telescope of 1839 became the largest in the world when Sir William Herschel’s observatory in Slough was dismantled the following year. In October/November 1840, the earl tested it out together with his friends, the Reverend Thomas Romney Robinson of Armagh and Sir James South, a controversial private astronomer from London. They looked at M1 in Taurus, the first of the nebulæ catalogued by Messier. Robinson recorded with excitement that rather than being an elliptical formless cloud “it is ragged, bifurcated at top, and has streams running out like claws in every direction”. The notion of claws stuck, and inspired the epithet by which M1 is now generally known, the Crab Nebula. More importantly, Robinson was convinced that he could see stars in what we now know to be the nebula’s gas clouds, and presented his findings to the Royal Irish Academy in Dublin the following week. South wrote a little ungrammatically to the earl, who had stayed at home:

“You cannot imagine the impression that his manner and matter made on the Academy, and his assurance that all nebula observations must be reformed, brought in as it was by allusions to cosmogonic theories of certain astronomers, in which he gave vent to philipics against Herschel and the French astronomers of no ordinary sharpness drew continued cheers from his hearers”.

So much for the Crab Nebula. But what of the Orion Nebula, and the other spirals and elliptical clouds visible in the sky? The three-foot telescope was not enough for Lord Rosse; indeed Herschel’s slightly larger telescope had also not done the job. The only course of action conceivable was to build the biggest telescope ever seen, an engineering feat which would add to the glory of Protestant Ireland and its aristocracy. The scientific world was agog to hear the latest news from Birr, and the progress of constructing the Leviathan was reported in detail. The nebular hypothesis was to be put to the test by the most advanced astronomical equipment in existence. Sir John Herschel, in his opening presidential address to the annual meeting of the prestigious British Association for the Advancement of Science in June 1845, said (referring to the nebulæ catalogued fifty years before by his father):

“Should the powers of an instrument such as Lord Rosse’s succeed in resolving these also into stars, and, moreover, in demonstrating the starry nature of the regular elliptic nebulæ, which have hitherto resisted such decomposition, the idea of a nebulous matter, in the nature of a shining fluid, or condensible gas, must, of course, cease to rest on any support derived from actual observation in the sidereal heavens[.]”

The stakes were high.

Over the Christmas holiday of 1845, with the country ravaged by famine, Lord Rosse (who was pretty fair-minded) invited John Pringle Nichol, the professor of astronomy in Glasgow and a convinced pro-nebular hypothesis liberal, to stay with him in Birr. The highlight of the visit was the use of the newly constructed Leviathan to observe the Orion Nebula; unfortunately the weather was bad that winter, and Nichol was unable to get more than a tantalising glimpse of the target, and certainly unable to decide whether or not it was made up of stars. He returned to Scotland, disappointed but assured of the earl’s integrity. He was hugely excited therefore when, a couple of months later, he received a note from Lord Rosse saying that the Orion Nebula had indeed been resolved into stars. Nichol was completely convinced. The nebular hypothesis was dead, a victim of the Irish weather which prevented its supporters from using the Leviathan. Most other astronomers agreed – notably, W.C. Bond and his son G.P. Bond at Harvard proudly reported in 1847 that they too had resolved the Orion Nebula.

Of course, we now know that the Orion Nebula consists both of stars too faint and closely packed to see and gas and dust condensing to form new solar systems. But it was not until the observations of Sir William Huggins and his Irish wife Margaret in the mid-1860s that the issue was resolved by analysing the spectrum of light from different nebulæ. Stars (including the Sun) emit light in a continuous spectrum, with a few gaps where gas absorbs certain frequencies. Gas clouds, on the other hand, emit light only in those frequencies, so when it is diffracted through a prism you get just a few lines rather than a continuous rainbow band. The Huggins’ evidence was so convincing – and more to the point, easily replicable by most astronomers without having to build world-beating equipment – that the argument over the nature of nebulæ ended almost instantly. Both the liberals and the conservatives were right, but neither was completely so.

And by this point the culture wars of science had moved on decisively from astronomy to biology, thanks to Darwin, with geology continuing as ever to play a supporting role. The Irish astronomers, rather than pushing the boundaries of knowledge forward, appeared to have been trying to keep them where they previously were. The great Irish telescopes fell into disrepair, and astronomy’s centre of gravity moved to places with a better climate than Ireland. But the Leviathan remains in place, recently refurbished, as the visible manifestation of a hugely political prestigious scientific project whose time has now long passed. Birr is now less than two hours’ drive from Dublin; visitors will find it well worth the trip.

Nicholas Whyte now works in international politics in Brussels, but as a teenager was Secretary of the Irish Astronomical Association and wrote his PhD on the social context of science in Ireland between 1890 and 1930.

Note on sources: I have drawn here very heavily on the classic account of the nebular observations at Birr is “Rosse, Robinson and the Resolution of the Nebulæ“, by Michael Hoskin, Journal for the History of Astronomy, Vol.21 (1990), pp. 331-344. I wrote in more detail about the Irish astronomers of the period in “‘Lords of Ether and of Light’: The Irish Astronomical Tradition of the Nineteenth Century”, The Irish Review 17/18 (Winter, 1995), pp. 127-141, which forms also chapter 3 of my book Science, Colonialism and Ireland (Cork University Press, 1999).