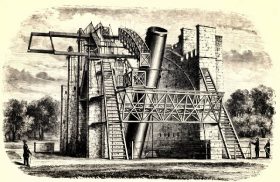 As part of our Bid to bring Worldcon to Dublin in 2019, we are asking our bid team and volunteers to write about aspects of Irish SF/F/H culture for our blog (and if you think this is something you might be interested in, please mail us!) The second of these is a three part essay by Nicholas Whyte on the Leviathan of Parsonstown. The first part is below.

The Telescope that Disproved Liberalism

The Leviathan of Parsonstown, built in Birr, County Offaly in 1845 and the largest telescope ever constructed up to that time, had an explicitly political purpose – to disprove liberal theories of cosmology. And it succeeded, though not entirely in good faith.

Nineteenth century Ireland saw a surprisingly large investment of effort into astronomy. The University of Dublin set up an observatory at Dunsink, north of the city, in 1785; its genius director from 1827 to 1885 was William Rowan Hamilton, to whom we owe various Ĥ-like Hamiltonian equations in different branches of mathematics and physics. In 1789 the Protestant Archbishop of Armagh set up an observatory in that city too, directed from 1823 to 1882 by the Reverend Thomas Romney Robinson, of whom more later. (I worked there myself in the winter of 1985-86, and showed visitors Halley’s Comet through one of the historic telescopes.)

The Irish landlords also got in on the act. In the 1830s, Edward Joshua Cooper built what was described at the Royal Astronomical Society in 1851 as the most richly furnished private observatory then known at his home, Markree Castle, near Collooney in County Sligo. Later in the century, John Birmingham of Tuam, County Galway, William Wilson of Daramona House, County Westmeath, and Wentworth Erck of Sherrington House, County Wicklow, all set up their own observatories and made modest marks on the global astronomical scene. Most of them bought telescopes made by the Grubbs, a Dublin father-and-son team of Quaker engineers, who supplied not only astronomers in Ireland but most of the rest of the world.

Nothing will ever match the endeavours of William Parsons, the third Earl of Rosse. In 1839 he built a reﬂecting telescope three feet (a metre) in diameter at his home of Birr Castle, Parsonstown (now Birr), Co. Offaly, and then went on to construct the ‘Leviathan of Parsonstown’, six feet (two metres) in diameter and ﬁfty-ﬁve feet (16.5 metres) long. It was a tad unwieldy – unlike the usual dome architecture, it was erected between two unroofed vertical walls, and had an azimuth range of only about fifteen degrees, rather than being able to cover the entire sky. It fell into disuse from 1890. But from 1845 until the 100-inch reflector of Mount Wilson Observatory in California was inaugurated in 1917, it was the largest telescope ever made.

Not surprisingly, the Earl’s family were scientifically minded also. His wife, Mary, was a pioneering photographer; his eldest son Lawrence, later the fourth Earl, carried on the astronomical tradition; and another son, Sir Charles Parsons, invented the compound steam turbine (and eventually bought the Grubbs’ telescope company). Their cousin, Mary Ward, published several popular science books. Unfortunately she became the first recorded fatality in a motor vehicle accident when on one of her visits to Birr she fell from an experimental steam car designed by Charles and broke her neck. Her great-grand-daughter, the Hon. Sarah Ward (who usually uses her childhood nickname Lalla), is known to Doctor Who fans as the second Romana.