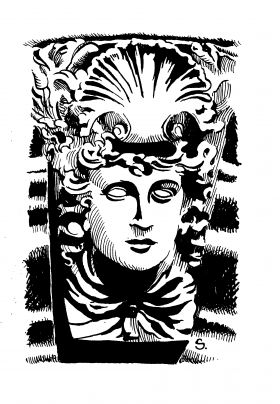 “What the heart knows today the head will understand tomorrow.”
– The Crock of Gold (1912)

James Stephens was born in Dublin in 1880. Like many young Irish poets of the early twentieth century, Stephens started his career under the tutelage of A.E.; he dedicated his debut poetry collection, Insurrections (1909), to his mentor. In Irish Fairy Tales (1920, illustrated by Arthur Rackham) and Deirdre (1923), Stephens explored the myths and legends of Ireland. His best remembered books are his Dublin novel The Charwoman’s Daughter (1912) and the philosophical fantasy The Crock of Gold (1912). He died in England in 1950.

Like Lord Dunsany, James Stephens was involved in the 1916 Easter Rising. His visceral account was later published in a riveting volume called The Insurrection in Dublin (1916), an extract of which was reproduced in Issue 7 of The Green Book. Stephens was also a reader of fantasy literature, and his review of E.R. Eddison’s The Worm Ouroborous (1922) can be found in Issue 8.

James Stephens was also celebrated for his superb poetical recitations, which he did often for BBC Radio. Numerous recordings still survive.