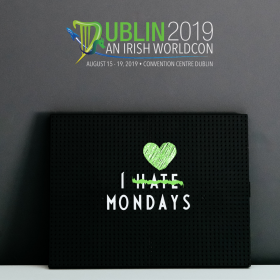 We hope you are all planning to stick around on Monday, because we have a full day of amazing events and programming for you! (If you’re not coming for the full weekend, check out our Monday day passes which are a fantastic value for all that is happening!)

Monday brings our final theatrical performance of the weekend, starting with the World Premiere of A Critical Miss, written and produced just for Dublin 2019 by Tantalus Ireland. A dramatic comedy, A Critical Miss delves into the world of table-top gaming and just how much it means to those who consider co-operative storytelling one of life’s greatest joys.

Convention Guest of Honour Professor Jocelyn Bell Burnell and Special Guest Dr. Norah Patten represent two different generations of Irish women rising to success and prominence in the fields of science and technology. They discuss their experiences and assessments of where the STEM fields are today, and shine a light on where they think we are going.

George RR Martin and Parris McBride Martin look at the connections in Ireland that the Martins have fostered, encouraged and help create, and are joined by Wild Cards writer Peadar Ó Guilín and Game of Thrones Story Board artist William Simpson, moderated by Marguerite Smith.

We are also excited to bring you a performance by Dublin-born traditional singer and bouzouki player Daoirí (pronounced ‘Derry’) Farrell, who has been described by some of the biggest names in Irish folk music as one of most important singers to come out of Ireland in recent years. After a promising debut album, The First Turn, back in 2009, Daoirí spent several years studying traditional music and performance across Ireland. Daoirí has won numerous awards and his third album, A Lifetime of Happiness, was just released in February 2019.

2000 AD – The Irish Connection features Irish contributers to the science fictional anthology comic talking about their work and the historical contribution Irish creators have made to the comic.

Other Monday items to attend include Guest of Honour Diane Duane telling stories about her animation working days; a look at the 100th Anniversary of Alcock and Brown; Shoot for the Moon: Lunar Depictions in SFF featuring our Guest of Honour Ian McDonald; Giant Robots in Science Fiction; Really Big Telescopes featuring our Guest of Honour Jocelyn Bell Burnell; a second concert by The Library Bards; The influence of Irish music on filk; Shifts in Irish mythology across the diaspora; Women Write About War; and an autographing session with Irish author Eoin Colfer (Artemis Fowl).

Finally, all good things must come to an end, and for Dublin 2019: An Irish Worldcon, that ending will come on Monday at 4:30pm. At our Closing Ceremonies, hosted by best-selling Irish fantasy author Eoin Colfer, we will take a look back at the weekend that was, say farewell to our Guests of Honor, and get a sneak preview of what awaits us at the 2020 Worldcon, CoNZealand.

We’re kidding – that isn’t actually the end! If you can stick around, we’d love you to help volunteer with our Move Out, and then join us in the final party of the weekend, the Dead Dog Party!

See you on Monday!