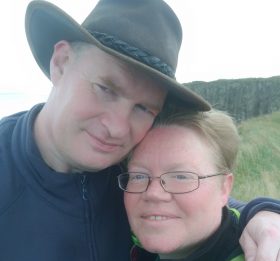 It was a bit of a gloomy August morning, with a hint of rain, as the bus dropped us off by Dunseverick Castle, the remains of a 6th century fort on the Antrim coast. It’s perhaps not the most impressive fort, as there’s almost nothing castley still standing, though it’s not hard to see why it would be an attractive place to build one. It’s basically a rock sticking out of the sea, easily defended from land or sea, and with a convenient, secluded bay.

We explore the remains for a few minutes. It’s a little challenging to get to, but not too dangerous. From the top of Dunseverick, we get our first glimpse of the fantastic views that will feature throughout the day, to our west, along the cliffs towards Giant’s Causeway, or to the east, where we can just make out the coast of Scotland.

We set off along the cliffs.

Northern Ireland Tourism have done a fantastic job of setting up an excellent cliff-top walk. From Dunseverick, it’s about 10km (6 miles) to the causeway, so not for everyone, but the terrain is pretty manageable, and the views are breathtaking. However, when they say cliff-top walk, it really is a cliff-top walk, so don’t expect new fangled inventions like handrails, or indeed, paths.

As we got closer to the cliffs we started to pass stacks of basalt, giving us a little preview of what was to come. It was really interesting to see the gradual change in the landscape as we approached.

During the whole clifftop walk we probably passed about three people, so it’s wonderfully secluded.

Eventually we came to a bench at Hamilton’s Seat with a great view of the Giant’s Causeway. It commemorates the recognition of Giant’s Causeway as a World Heritage Site. From this distance all the people on it looked like ants, so it really made us feel like giants.

The next phase of the walk contrasted with the first in that we met dozens of people. We made our way along the cliff till we come to a set of rough steps leading down to the causeway. There were handrails and signs warning us to take care.

The causeway itself is a fantastic experience. It’s certainly one of those places that words and photos really don’t do justice to, and you have to experience it to appreciate it. The basalt stacks are an amazing sight, having formed as almost perfect hexagons, and it’s hard to believe they are a natural formation, and possibly one of the most “alien” landscapes on Earth.

We had fun ambling around the different levels of the causeway. It stretches out into the sea, though there are people in high-vis jackets to tell you off if you wander too close to the waterline.

While a 10km cliff walk is a great way to experience the Giant’s Causeway, I know that won’t suit everyone. You can, of course, just park at the visitor centre. There are also several points the bus can drop you along the cliff walk, if a shorter walk would suit you. Finally, there’s a narrow gauge railway from the town of Bushmills to the Giant’s Causeway, which is a great way to experience it.

That was by no means the end of our day, but the rest of our walk and especially Dunluce Castle really warrant a post of their own, so come back soon for part 2!