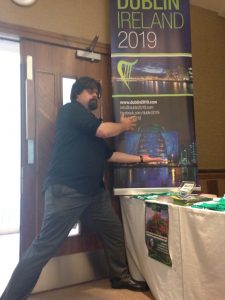 Time for another Chat with one of our supporters, where we pester authors to answer some quick fire questions and tell us why they think a Worldcon in Ireland is a great idea! Adrian Tchaikovsky is a familiar face at many UK conventions, and we were delighted to catch him at this years’ Octocon in Dublin as well! Adrian’s new fantasy series Guns of the Dawn – which he describes as ‘Pride and Prejudice meets Sharpe’s Rifles head on (or “Pride and Extreme Prejudice” as a friend described it)’ will be released in paperback TOMORROW on the 19th November (so after you’ve read this, get ye gone and reserve your copy!), and his new series starts in March next year with The Tiger and The Wolf. Adrian is also best known for his long running series ‘Shadows of the Apt’, which ran to ten books, and included many more short stories and discussions on his webpage.

“Holy crap, spiders!” Or, more seriously, taking the road less travelled in epic fantasy (and, more recently SF). In Shadows of the Apt I’ve tried to take the traditional clash of empires and blend it with steampunk and a Sci-fi march of technology and all sorts of weird insect people rather than elves and orcs and the like. Guns of the Dawn takes a lot of the tropes of regency fiction, and the Polly Oliver story of a woman going to war, and takes Jane Austen to the Vietnam War. Children of Time is hard SF showcasing a very new and different alien culture and what happens when it runs headlong into humanity. I’m all about going to new and strange places.

I recently went back to an older manuscript, from about 3 years before I got published, to see if it could be salvaged, and although the answer was “yes” it really brought home to me the bad habits I still have with my writing – mostly to do with how I tend to over-write if not checked. I’m hoping that will stand as a lesson for my future work, and start to cure me of them.

Over the course of your writing, which character has surprised you the most or developed furthest beyond your original concept?

In Shadows of the Apt there’s a character named Drephos. He is a villain – he’s a mad scientist type, basically, whose portfolio includes weapons of mass destruction. This is a bit of a spoiler, but he was supposed to die at the end of a relatively early book – he’d been the mentor to one of the heroes, and they clashed, and of course the hero was meant to finish him off. Except he didn’t. In fact the hero pretty much got talked round, because Drephos turned out to have some really scary, really persuasive (and very horrible) rhetoric. And so he lived, and he went on living, and continued to do terrible things in the world for the rest of the series. For someone who was supposed to just be a bad guy, he turned out to have a lot of mileage in him. 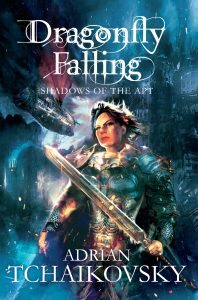 As an author or creator, why is attending conventions important, and what do you love most about them?

Writing is a very solitary pursuit. Conventions are really the only time I get to meet up with most of the other writers and industry types I know. Writing is a tough game, and the publishing industry is always shifting ground, and being reminded that you’re not alone, and that there are plenty of people in the same boat, is enormously mentally stabilising.

Having been to both sides of Ireland a few times now, I’ve discovered that there’s a really strong and energetic fan community there that has a lot to offer. I’ve always been made very welcome, and Ireland itself has such a rich heritage of literature, history and legend. 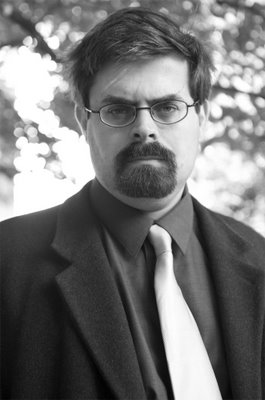 Adrian Tchaikovsky was born in Woodhall Spa, Lincolnshire before heading  off to Reading to study psychology and zoology. He is a keen role-player and has trained  in medieval combat. He’s the author of the critically acclaimed  Shadows of the Apt series as well as standalone works Guns of the Dawn and Children of Time, and numerous short stories. 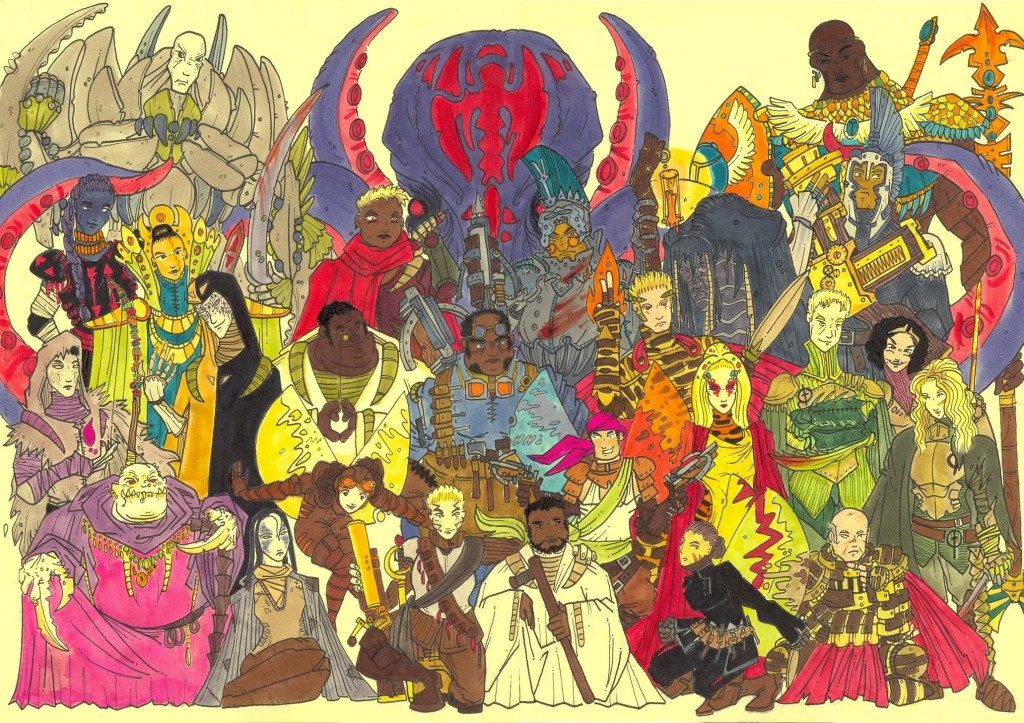 Fan Art of Shadows of the Apt by David Mumford