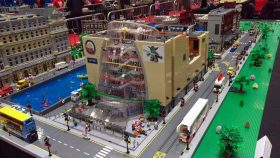 THIS. IS. AMAZING. One of our subscribers is a huge Lego builds fan and he put us in touch with David Fennell, who has built a Lego version of our venue, the CCD! Check out the auditorium, where nearly 300 stormtroopers are taking part in a debate over ‘Sith vs Jedi’, hosted by none other than C3P0 (although you probably don’t recognise him because he doesn’t have a red arm). Here’s a short gallery (it will scroll through slowly, or click ‘show thumbnails to see the whole lot) and David’s description of the build:

The Model was completed in December 2015, just in time for Brick2015 in London which is why it has an AFOLCON sticker on the front. It took about 9 months to complete. That sticker will be replaced next month for its appearance at Legoworld in Copenhagen, Denmark. The model contains over 50,000 pieces and uses some complex techniques to replicate the glass and front canopy. There are three (revolving) doors, one of which has a surprise minifigure therein. 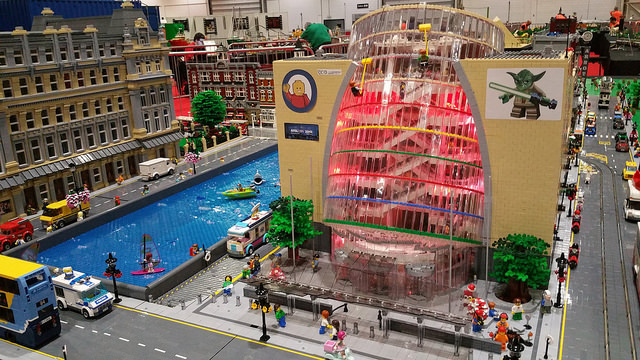 The building extends to 6 floors with bars and conference room facilities on the first, second and fifth floors. There are three motorised air conditioning fans on the roof of the stage area. There are (non-moving) escalators and lifts to all levels.

The building has a large ‘cut-out’ to allow a peek inside at the almost 300 storm-troopers attending a Star Wars convention which is themed as a Sith v Jedi debate with C3PO as host behind a Dublin Convention Centre shaped podium. The background is ‘Hoth’ themed. The main auditorium uses a rare dark orange colour scheme. The auditorium also has a fully illuminated and manned control room. 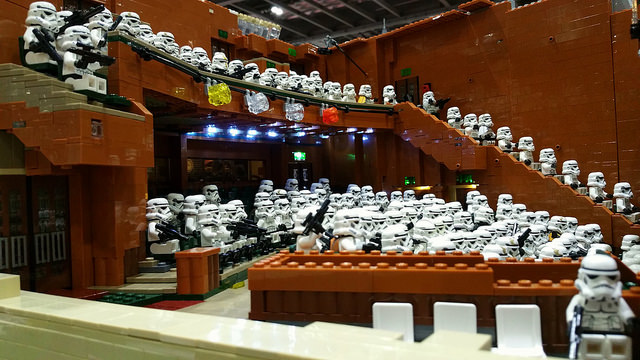 There is remote controlled multi-coloured lighting in the glass atrium and other lighting throughout the building, for example to show conference rooms, WC facilities, stage areas and emergency exit signs. There is a rear loading bay for LEGO Group trucks and a small parking area with cobblestone paving dockside.

You can find more pictures of the model on David’s Flickr page under the name Dfenz (here ). Thank you so much David, for sharing this amazing piece of work with us. 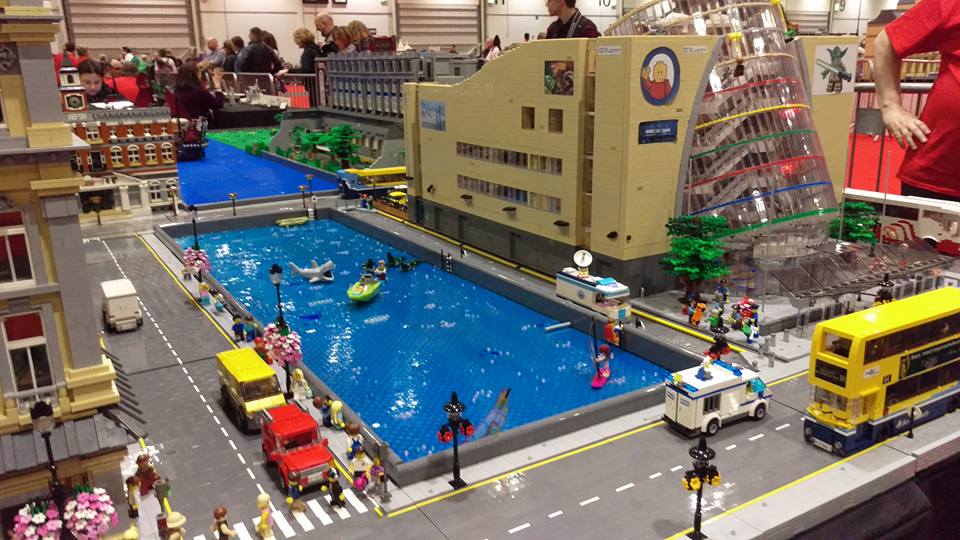