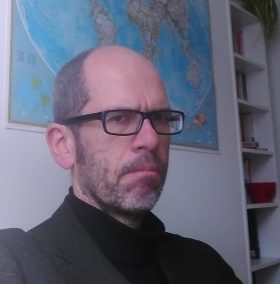 Don’t know where to start with Retro Hugo nominations? Ian Moore investigates what else was happening in fandom in 1943.

There is a raft of other categories beyond fiction and dramatic presentations in which work from 1943 can be nominated for the Retro Hugos that will be awarded this August in Dublin. As with previous posts, the items listed below are being offered as a guide, but readers are free to nominate such other eligible works or persons from 1943 as their researches uncover.

Comics have sometimes been a bit of a problem category for the Retro Hugos. Lots of people like comics and lots of comics were published in years eligible for Retro Hugo recognition, but many 1940s comics were extremely ephemeral, never reprinted and only read in more recent years by serious collectors. There are online databases containing scans of vintage comics now in the public domain, notably Comic Book Plus and the Digital Comic Museum, but they are a bit terrifying in the amount of material they offer. The Digital Comic Museum unfortunately does not have an obvious means of searching its database by year, but Comic Book Plus does at least allow readers to see comics published month by month in 1943. If readers start here they will see comics books whose precise 1943 cover date is unknown. Clicking on next brings up January 1943 comics, and so on. Comics here can be downloaded (after registering) or viewed online. So, trawling there might uncover comics worth nominating, but beware: many big comics of the era are still in copyright and are not included in Comic Book Plus (or indeed in the Digital Comics Museum). Batman and Superman appeared in a variety of titles and formats in 1943 but neither of them are to be found in these datasets.

Another comic that is not in either of those databases, presumably because it remains in copyright, is The Victory Garden, which appeared in Walt Disney’s Comics and Stories #31. This sees a popular anthropomorphic duck’s attempts to grow vegetables being thwarted by some greedy crows. The Victory Garden is noteworthy as the first Donald Duck comic drawn by Carl Barks. Carl Barks also gave us The Mummy’s Ring (originally appearing in Four Color Comics #29) in which Donald and his nephews find themselves caught up in Egyptological adventures.

Wonder Woman and Plastic Man have appeared separately in two 1943 comics that have received some praise. In Battle for Womanhood (created by William Moulton Marston and Harry G. Peter for All-American Publications and appearing in Wonder Woman #5) Wonder Woman faces up against Dr. Psycho, who attempts to undermine the US war effort by impersonating George Washington and warning against the employment of women in war industries. Plastic Man and the Game of Death (by Jack Cole for Quality Comics) sees the stretchable superhero take on a death cult, Japanese spies (with the usual problematic stereotyping), and cowboys in a series of bizarre adventures.

Newspaper strips were an important part of the comics firmament in 1943. The year saw the conclusion of the Flash Gordon series Fiery Desert of Mongo (by Alex Raymond for King Features Syndicate). Two Buck Rogers strips concluded this year, Martians Invade Jupiter and Mechanical Bloodhound (both by Dick Calkins for National Newspaper Syndicate); these were subsequently collected as Volume 9 of the Buck Rogers In The 25th Century: Dailies

The Brick Bradford newspaper strip On the Throne of Titania, created by Clarence Gray and William Ritt for the Central Press Association, finished its run of more than two years in 1943. Like Flash Gordon, Brick Bradford started life as a Buck Rogers knock-off before embarking on his own adventures, travelling through both time and space, eventually becoming better known in Europe than in the USA. As well as the daily strips, Gray and Ritt also produced a weekly Brick Bradford strip for the Sunday newspapers, with The Men Of The North and Ultrasphere both finishing in 1943.

1943 also saw the conclusion of the Sunday newspaper strip John Carter of Mars, adapted by John Coleman Burroughs from his father’s books and distributed by United Feature Syndicate. The strip was less successful than Rice Burroughs’ novels and was sadly cancelled in midstream in March 1943.

A more popular newspaper strip in 1943 was Prince Valiant, created by Hal Foster for King Features Syndicate. Readers may have encountered Fantagraphics’ reprints of Prince Valiant, volume 4 of which includes stories from 1943. Little Orphan Annie (by Harold Gray, for Tribune Media Services) was also widely read.

In 1943 as now comics were not just being published in the Anglophone world. In Nazi-occupied Belgium, Hergé was writing Tintin comics, with Secret of the Unicorn published in book form by Casterman and its sequel Red Rackham’s Treasure serialised in Le Soir. Unlike some other Tintin titles, neither of these deal particularly with science fictional or explicitly fantastic themes, yet there is a strange outlandishness to all of Tintin’s adventures that could slide them into Hugo eligibility.

Another noteworthy Belgian comic of 1943 is Le Rayon U (translated much later into English as The U Ray) by Edgar P. Jacobs (more famous for his subsequent Blake & Mortimer comics). Le Rayon U appeared in the pages of Bravo and is a fantasy/science fiction tale in the Flash Gordon mould, which it was produced to replace, as the US entry into the war meant that Flash Gordon comics could no longer be imported into Europe.

As with the contemporary Hugos, professional science fiction and fantasy artists of 1943 are eligible for Retro Hugo recognition. Many of these saw their work appearing on the covers of the era’s magazines, samples of which can be seen at the links below:

Of course, not all artists got to do covers in 1943. Artists who only did interior art this year include Alex Schomburg, Edd Cartier, Frank R. Paul, H. W. Wesso, Hannes Bok, & Hubert Rogers. Readers may have encountered some of their 1943 work.

Mervyn Peake would subsequently gain a measure of fame as the author of the Gormenghast novels, but in 1943 he was attempting to earn a living as an artist. His illustrations for an edition of Coleridge’s Rime of the Ancient Mariner could perhaps earn him a Retro Hugo.

Children’s book illustrations might also be the kind of thing that appeals to Retro Hugo nominators. Antoine de Saint-Exupéry‘s own illustrations for The Little Prince are a big part of that book’s appeal. Enid Blyton’s The Magic Faraway Tree would not be the same without Dorothy M. Wheeler‘s illustrations.

Your guess frankly is as good as mine with regard to the long form editor category. In the short form category there are however a great many people to choose from. Science fiction was still something that people experienced primarily in periodical magazines, whose editors played a vital role in developing the genre. Some eligible editors of 1943 periodicals and anthologies include:

Donald A. Wollheim‘s editing career meanwhile saw him compiling the The Pocket Book of Science Fiction in 1943.

As with the regular Hugos, a variety of fan publishing activities from 1943 are eligible for Retro Hugo awards. There was probably nothing in that year eligible in the Best Fancast category, as few science fiction fans had their own radio stations, but by 1943 the explosion of fandom meant that there is plenty of material that could now be honoured in the Best Fanzine, Best Fan Writer, and Best Fan Artist categories. There might also be an overlap between the Best Fanzine and Best Semiprozine categories.

Fan produced material is almost by its very nature ephemeral and there are probably few Hugo Award nominators who have an extensive collection of fanzines from 1943. However, this in no way prevents people from nominating material from that year. The Fanac Fan History Project collects scans of old fan publications and has posted up links to Retro Hugo eligible zines published in 1943. Browsing here may well throw up items worth nominating in all of the fan categories. Even people who have no interest in nominating for the Retro Hugos will I think find the Fanac Fan History Project a fascinating window into the history of fandom.