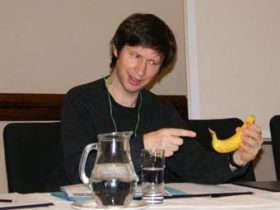 We have another short story for you this week on Irish Fiction Friday! We’ve got many supporters around the world (are you one yet?), so it’s great to see so many Irish SF/F/H authors getting involved with our Bid and our efforts to bring Worldcon to Dublin in 2019. Peadar Ó Guilín is a member of our Bid Team and our Irish Language expert when needed (you’d be amazed at the awful things we make him say 😉 ). Peadar’s series The Bone Trilogy, is a YA series with fantasy and SF elements (‘Eat or Be Eaten!’), and he is a prolific short story writer and member of the Irish SF community. He’s allowed us to reprint his supernatural short story; The Drowner, as this week’s example of the talent and diversity that Ireland has to offer, which you can read below:

There’s also a podcast of The Drowner read by Cian MacMahon, here

THE DROWNER
by
Peadar Ó Guilín

Muiris hit the water with a shock of cold. Salt stung the rope burns on his hands and blurred his vision. He should have been frightened, terrified even. But instead, he felt a great calm descend on him. It was the sea itself that did that. It lay around him like a fairy kingdom with sunlight flashing through swarms of minnows, while above his head, a fleet of jellyfish sailed across the sky.

So entranced was he, that even when the Drowner grabbed him, he kept still.

His reaction might have puzzled the creature, if they can feel such things, because people usually panic when a Drowner catches them. Maybe you’re a fisherman, diving for a tangled lobster pot. Or a sailor, tumbled overboard and still trying to figure out which way is up so you can swim back to your crew.

But whoever you are, you don’t stand a chance — it’s all too sudden. Out of nowhere, thin arms wrap around yours and pin them to your body. You can’t swim away. You can’t look away either from the white, human face of the Drowner staring into your own. Fish will have nibbled at it. Maybe its eyes and lips are gone, but no amount of kicking can loosen its hold. No biting, no thrashing.

You sink together. Hopelessly. The creatures swallow stones, you see? From the ocean floor. All they have to do, is hang on.

The lobster basket you came down for is forgotten. The fisherman’s boat gets smaller and farther away. All of your air escapes at once in a silent, bubbling scream.

And then, stillness returns to the sea.

But for Muiris, all of this was different. He felt no panic when the creature pinned his arms to his sides — he barely felt anything at all. Apart from pain in his ankle and a mild sense of puzzlement. It seemed to him that he recognized the Drowner’s face as it pulled him to the bottom of the sea. Yes, he knew those torn features. A boy no older than Muiris. But dead now. Transformed. Why couldn’t he remember the name?

Cóilín, perhaps? Was that what the boy had been called before he became a Drowner?

Muiris had played with him on the far side of the island one time when daddy had gone over to Cill Éinne to dicker for a pony. It wasn’t so long ago.

The two children had found a beach and had laughed and fled before the waves that would some day hide their last meeting. Muiris loved it. He had always been a lonely boy and didn’t know anyone in Cill Mhuribhigh who wanted to play with him. And here at last, he had found a friend.

Unfortunately, daddy never took Muiris back there and he had been too shy to go over by himself. He never forgot Cóilín, though, and always thought of that meeting as one of the best times in his life.

As they sank together, Muiris continued to stare into the strange white face of the Drowner. It hadn’t decayed too badly. The hair must have kept growing after he’d been lost. Bits of twig lay tangled there and tiny fry swam in and out of it as the walls of the island’s roots kept rising away from them. The eyes were whole too and Muiris fancied he saw a flicker of recognition in them as well as a slight, shy smile on the rotted lips.

“Why?” he wondered. “Why do the Drowners drag people to the bottom with them? Is it for food? Will he try to eat me?” It was strange that he had never thought of this before, that nobody on the islands ever asked that question.

A small, first bubble of air escaped from Muiris’s mouth. But still, he could not find it in himself to fight. The sea didn’t want him to. Today, it required only sleep.

Yes, he decided, the boy had definitely been called Cóilín. Muiris remembered that howling night when half the island had been awake searching for him. He had trailed after his father and a few others from Cill Mhuribhigh up to the the old stone fort, shouting Cóilín’s name only for the wind to snatch it away every time.

Further along the cliffs, sea water shot through Monster’s Hole and into the air above them, an angry, hungry fist that reached out as it fell back again. The boy was said to come here after fights with his parents, in spite of the warnings that were almost the first words every child on the island learned. But he must have been swept away, for they never found him.

Months after everybody else had given up the search, Cóilín’s mother wandered the island in all weathers, still looking. An older son accompanied her with one arm around her shoulder and a wan, apologetic smile for all those she troubled for news.

What would the poor woman think now if she could see what her boy had become?

More bubbles escaped Muiris’ lips. He felt lightheaded, but still totally unafraid. Only sadness filled the gaps left behind by the fleeing air.

His eyes drifted away from those of the Drowner. He could see now where they were headed. Two bodies had been tied to the floor of the sea by a tangle of old netting and weeds. One of the victims, from his bawneen jumper, looked to have been a fisherman, probably off that boat the Ó Cadhains had lost back in April.

He could see from the bodies that the Drowner had not been eating them after all. They looked… comfortable, or as comfortable as the creature could make them. The recent corpse of a little foreign girl from off the ferry lay beside the fisherman. Muiris was close enough to her now that he could see a rotted teddy bear that lay fastened to her wrist by strands of seaweed. Other toys lay scattered about the sea-bed, but she was in no condition to play with them.

Beside her, the Drowner had prepared a place for Muiris: pieces of old rope weighted down by rocks, with bunched up rolls of canvass such as a worn-out sailor might make for himself to sleep on. The Drowner’s head seemed to nod towards it, as if to welcome his friend to their new home, where there could be an end to loneliness. And finally, Muiris understood what the creature wanted, what he himself had always dreamed of in all his friendless walks along the beach.

Before his thoughts could travel any further down this track, he felt the pain in his ankle again, so sharp this time, it jerked most of the remaining air out of his lungs. But it woke him up too and suddenly, a desperate instinct to live exploded him into action. The creature had only trapped his arms, after all. Muiris was not as helpless as he seemed.

He swung open his legs and clamped them tightly around the body of the Drowner. He saw the mouth that had been Cóilín’s open in slow surprise. The creature’s victims had always tried to get away before and the last thing it must have expected was for Muiris to grab hold of it instead. But then, most people who fell into the Drowner’s grasp didn’t get there on purpose. They didn’t try swimming with a heavy rope fastened to their ankles.

Muiris felt the rope tighten, drawn from above. The two of them began to rise with the Drowner bucking and scratching to get away.

However, Muiris had left it too long. His vision blackened from lack of air, his head pounded. He felt the distant, clumsy blows of rotting fists. He had to breathe. Too late, too late!

And then, he heard a great gasp! — not from his own throat, but from the Drowner’s. The rope tied to his ankle swung them both up out of the water and through the murderous air. He caught spinning glimpses of everything else: the horrified eyes of men working the winch; the arms of his father and brothers reaching to pull him and his catch on board. He heard the shouted Latin prayers of the parish priest.

Then, for the last time, he saw Cóilín’s eyes, staring into his own. The little mouth was leaking black fluid and stretched wide in confusion and fear.

“I’m sorry,” Muiris said, or meant to, before rough hands dragged him away from the captured Drowner.

Daddy was hugging him, “Muirisín, Muirisín. You were supposed to pull at the rope to signal us. Why didn’t you pull it?” He tried to push free of his father’s grip. He had to block his ears! He had to! But it was too late.

He heard the fishermen draw their knives above the sound of Father Máirtín’s prayers. He saw them move in on the boy that might once have become his friend. The blades rose and fell before he could look away, spraying rotted guts and scraps of old skin.

He turned pleading eyes out towards the ocean. But it didn’t care. The surface was still again, and it slept.
[The End]