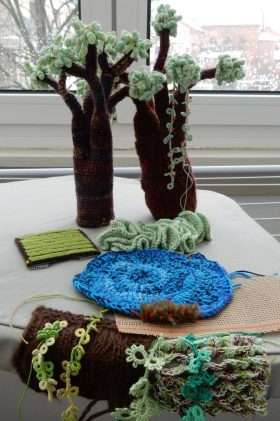 A community art project can be a fun way for lots of people to create something together. In today’s blog post, I’d like to introduce you to a couple of projects that were part of past Worldcons, and give you a preview of what we’re preparing for Dublin. We have already started, and you can help!

Loncon 3 – Pigeons!
To promote Loncon 3’s Exhibits, many people made or photographed felt pigeons, following a design from Serena Culfeather. These often-elaborate creations travelled the globe, starred on a dedicated Pinterest page, were distributed on postcards at LoneStarCon 3, and had their own Eastercon workshop. In the Exhibits hall itself, they flocked to the feet of the Wizard of the Pigeons (whose author was one of the convention’s Guests of Honour). 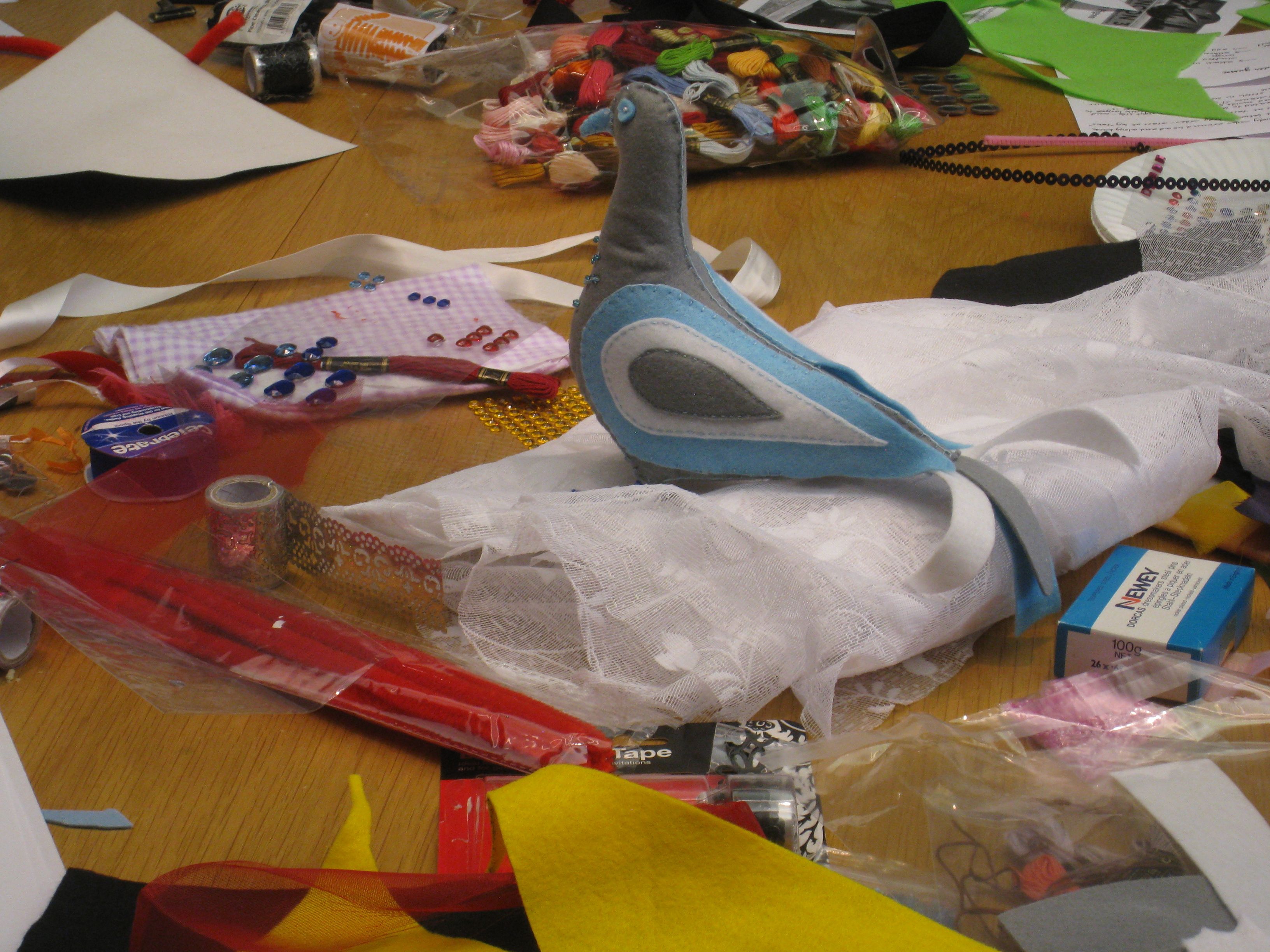 Helsinki in 2017 was my first Worldcon. I ended up volunteering for the Craft Corner, and managed to turn my fascination with hyperbolic crochet into a community project. I ran into hyperbolic crochet via the Institute for Figuring, which is responsible for the Crochet Coral Reef. My first impression of a community art project was taking part in the effort to create the UK Reef. From there it wasn’t that much of a leap to start and run something in Helsinki. Doing that turned out to be the fastest way to find and get to know all the crafters around. If you’re interested in the nitty gritty details of what goes into running a project like this, here’s a writeup of my experience.

We had loads of fun making pretty things as you can see here:

I had enough fun in Helsinki that I wanted to do something similar for Dublin. The basic idea has been inspired by quite a few influences, with the hyperbolic crochet coral reef probably being the most important one. How about building something fantastic instead of a fantastic underwater world? I hugely enjoyed Martha Wells‘ Books of the Raksura, and one part of that enjoyment was its worldbuilding. A whole village living inside a giant tree that has platforms with all sorts of life growing on its branches? What an opportunity to show off all the myriad ways you can create organic forms using yarn and thread, with possibilities to contribute for everyone! And this time, I want us to get a head start.

I’ve already started making things as part of a proof of concept and as examples for the kind of things we’re looking for. The Raksura Colony Tree is a blog dedicated to coordinating and documenting this project, with lots of ideas. There’s also a Ravelry Group, if that’s more your speed. So, if you want to help to make this project really impressive, grab your favourite crafting tools and some yarn and get to work!

At Worldcon itself, the community art project will be located in the Warehouse at Point Square, right next to the Art Show. We’re planning a series of workshops for making more things for the model as well as for putting things together. Ideally, we’ll have something to show from Day 1, with things getting better and better as the con goes on.